My sister and I are now in Tokyo! We met up with our cousins and their friend (also traveling in Japan at the same time as us) for lunch.

We had pancakes and pies for lunch. Yep, breakfast and dessert for lunch!!

My sister ordered a banana caramel chiffon pancake, while I ordered the sour cream apple pie. (I will focus on the pancake in this post.) 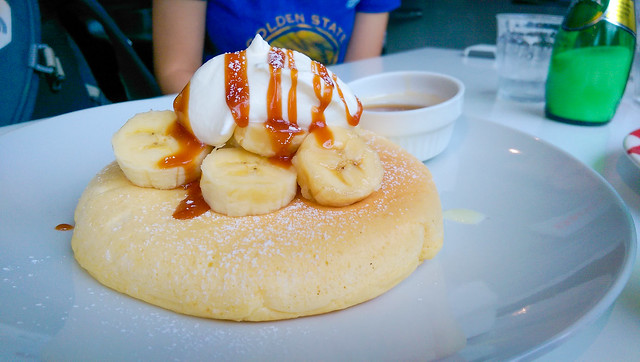 There were sliced bananas on top of a fluffy pancake with whipped cream and a caramel drizzle on top, served with golden syrup on the side.

Japanese hotcakes (ホットケーキ) are similar to American pancakes, but are a bit fluffier and have a little more sweetness. The eggs are beaten with a mixer, hand or stand, until foamy to help create this fluffy texture. Hotcakes are a popular breakfast treat in Japan and often prepared using a packaged hot cake mix. No need for a hot cake mix here. They are actually quite easy to make! They are also versatile, with a variety of toppings to choose from based on your tastes and what you may have in your refrigerator.

Cooking With Dog has a (cute) video on making Japanese pancakes. She covers the pan while cooking the pancakes, which is a technique not used in making American pancakes.

Each country has their own take on pancakes (also called hotcakes, flapjacks, griddle cakes). I previously posted about Denmark’s version, which was flat unlike the American and Japanese version. If you’re interested, Buzzfeed has a post called 24 Pancakes From Around the World, and Ingredient Matcher has posted 50+ different pancakes around the world. I have yet to try all kinds; the ones I’ve had can be accessed by the tags ‘hotcake‘ or ‘pancake‘ (I like to think of hotcake as the specific term and pancake as a broader term).