Some time last year, I went back to Ringer Hut and got their “Nagasaki Saraudon”. Like the name says, sara udon (皿うどん) is native to Japan’s Nagasaki prefecture. Sara udon is a Japanese-Chinese dish; a Japanese dish influenced by the Chinese. 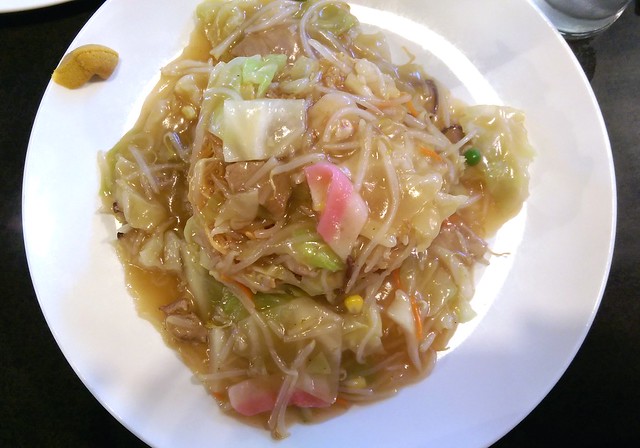 From the top, it looks like a pile of vegetables and pork in gravy-like sauce. But when you look on the side, there’s crispy fried noodles underneath! 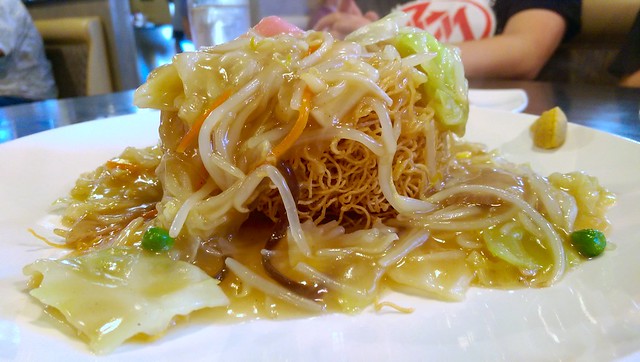 Eating this brought back childhood memories of eating the Cantonese crispy chow mein. My sister and I always fought over who’d get the crispy noodles, because in this case, crispy noodles is always better than soggy noodles!

Sara udon (皿うどん), literally “plate noodles” is a dish native to Nagasaki prefecture, Japan. Consisting of a base of noodles, and a topping of fried cabbage, bean sprouts and other vegetables, as well as squid, prawns, pork, kamaboko, etc.

The style and thickness of noodles varies between restaurants. Many restaurants outside Nagasaki prefecture serve only thin noodles which has led to the common misconception that the dish is only ever served with thin noodles.

If many people are eating together, it is customary for everyone to take their portion from a single large central dish.

[In Japan, there] are food delivery services (demae) that specialize in sara udon for parties or offices that are working overtime. Sara-udon is [also] served in school meals at grade schools in Nagasaki prefecture.