Union City is predominantly Asian, with Filipinos as the majority ethnic group. A few months ago, one of the middle schools in the town was renamed “Itlong-Vera Cruz Middle School” to honor the Filipino-American labor leaders Larry Itliong and Philip Vera Cruz.

There many Filipino restaurants in Union City, or even in the Bay Area, until the last few years. If you were of a different ethnicity, you could only try Filipino foods through a friend whose parents cooked Filipino dishes at home. Now, with the increasing Filipino restaurants in the Bay Area, it seems that the younger generation, or the first generation Filipino-Americans, are gradually sharing their cuisine with others!

My sister and I went to Adobo Connection, which used to be part of the international chain based in the Philippines with the same name, for dinner over the weekend. They are under new management and will slowly be adding more items to their menu over the next few months! 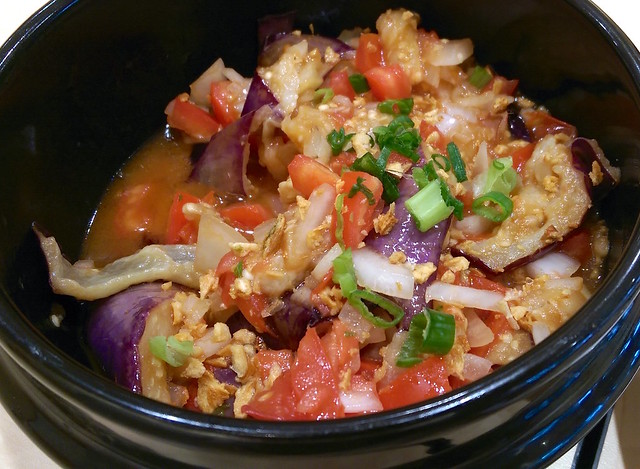 One of the dishes that we got was ensaladang talong, also known as ‘Filipino eggplant salad’. This salad is on the sour side and typically has grilled eggplants, tomatoes, and onions. This salad is also vegetarian, whereas Filipino dishes are known to be meaty and greasy.

As I had mentioned before [the] Philippines does not have a lot of salad type dishes and most of it are consumed either as a side dish or appetizer rather salad entrees due to the strong salty and sour flavours. This dish is no different, Ensaladang Talong or Eggplant Salad is a very sour salad made out of grilled eggplants, tomatoes and onions. It is usually consumed as an accompaniment to grilled meats and seafood, not just it adds a different dimension to the flavours when paired with meats it also acts as a palate cleanser attributed by its sour taste.

One thought on “Philippines: Ensaladang Talong”