My sister and I went to the Ghibli Museum today! The museum was literally full of the artworks of Miyazaki and Studio Ghibli. It was incredible seeing how much effort was poured into each animation. If you’re a fan of their works, do not miss out on this!

If you’re a foreigner visiting Japan, be sure to get tickets three months ahead through your local JTB agency. For those in the United States, find how to order tickets by clicking here. Alternatively, if you have a friend/family in Japan, they can get it from a Lawson convenience store ahead of time before it’s sold out. The difference between the two ways, is the JTB voucher does not have any entrance time restriction.

We had late lunch at Straw Hat Café, the sit-down restaurant at the museum. An English menu was available upon request, and their menu also changes according to season.

I ordered “Neapolitan with Naughty Meatball” (¥1,200), a wheat noodle dish made with ketchup and topped with a large meatball. There were also two quail eggs, bell pepper, mushrooms, onion, and grated cheese in the dish. 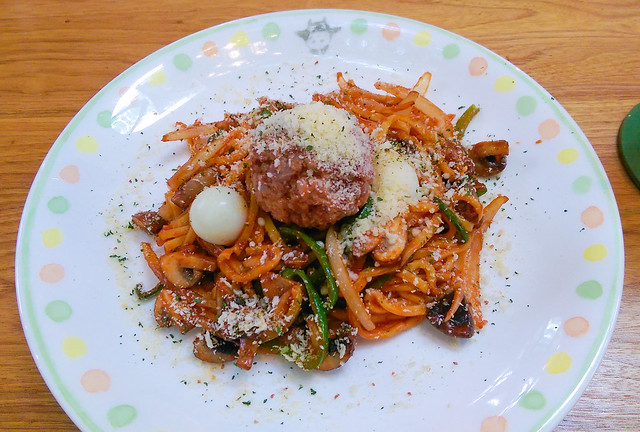 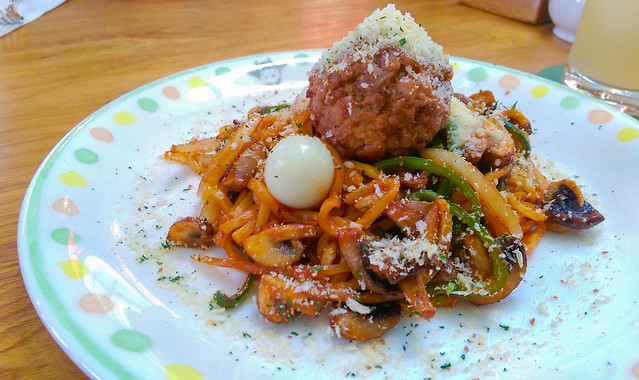 If you’re not a fan of ketchup, you won’t like this dish. But then, who doesn’t like ketchup?! The noodles were soft (not too soft), sweet, and ketchupy! The meatball was delicious too! Yumm.. 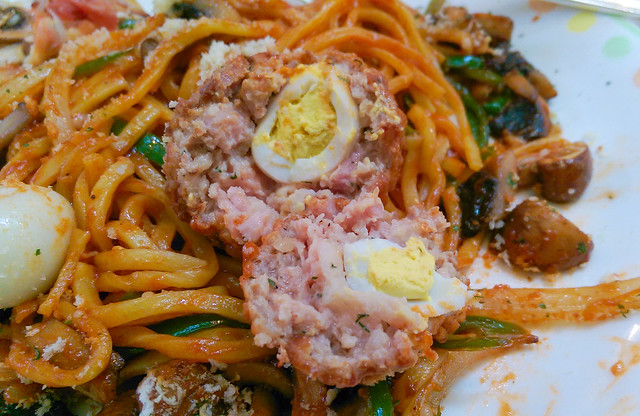 This dish is better known as “Naporitan” or “Napolitan” (ナポリタン) in English because the Japanese don’t have the /r/ or /l/ sound, and do not have two vowels next to each other. It is also a yoshoku dish, a Western style dish adapted for the Japanese. It can also be considered as a Japanese-Italian dish.

This dish was created in Yokohama, according to Wikipedia:

It was created by Shigetada Irie (入江茂忠), the general chef of the New Grand Hotel (Hotel New Grand) in Yokohama, when he was inspired by one of the military rations of GHQ, which was spaghetti mixed with tomato ketchup.

Just Hungry tells us more about dish, in greater depth:

According to Wikipedia Japan, Spaghetti Napolitan was invented shortly after World War II, by the head chef of the hotel in Yokohama that was used as the U.S. military headquarters by General Douglas MacArthur. He allegedly got the idea from the spaghetti and tomato sauce eaten by the U.S. troops. Over the years the recipe was tweaked, using ketchup instead of the tomato puree in the original recipe for example, since the latter was hard to come by for most Japanese people at the time. There are some Napolitan recipes calling for crushed tomatoes or tomato puree, but using ketchup is, as odd as it may sound, the more ‘authentic’ way.

To make Spaghetti Napolitan that is as ‘authentic’ as you might get in Japan, you’ll want to cook the spaghetti a minute or two over the al dente stage. Up until pretty recently (say the last 20-30 years or so), Japanese people preferred their pasta to be soft, like other noodles they were used to like soba, udon or Chinese style noodles (and as Chinalily commented, the ‘soft pasta’ preference is seen in other Asian countries too.) You can even cook the noodles in advance and then re-heat them in the pan, something that purist Italian cooks would gasp in horror at but is the standard way of dealing with Japanese style noodles. Do remember that this is an adaptation by one culture of the food of another to suit existing tastes.

One thought on “Yokohama: Naporitan (aka Napolitan)”