When I started working at NASA Ames Research Center as a summer intern in 2009, I noticed there was a lack of diverse restaurants in Mountain View. The restaurant scene has changed so much the past five years! I think the growth of tech employees in the area contributed to this (Google, Microsoft, NASA, LinkedIn, Tango, Symantec, and tons more).

I had lunch at a katsu restaurant that opened mid-last year that’s located on El Camino, near Shoreline. I got the cheese katsu, which was breaded pork loin (pork cutlet) stuffed with mozzarella, served with miso soup, tomato, yellow radish, horseradish, and all-you-can-eat (AYCE) cabbage. 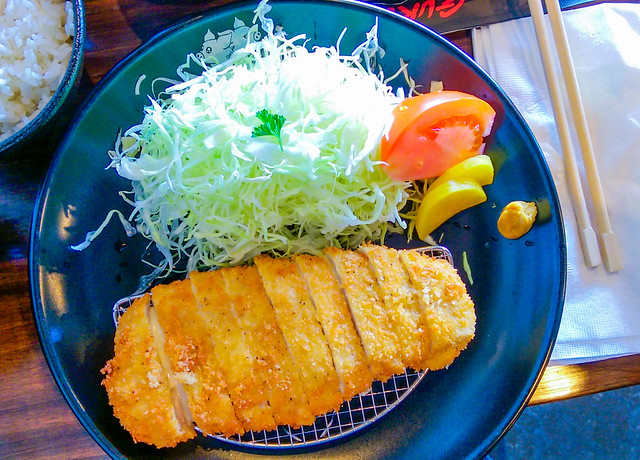 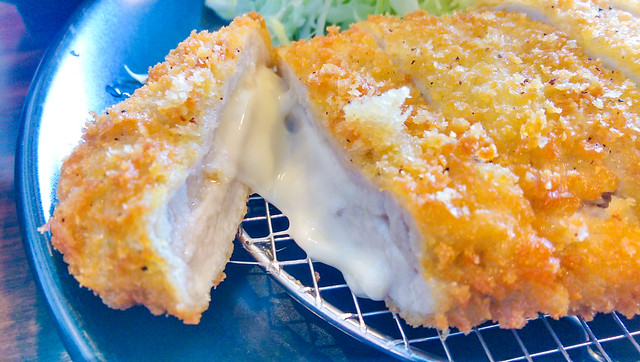 I was also given sesame seeds in a small motar with a pestle, to grind and combine with tonkatsu sauce already available on the table. I thought this concept was pretty neat, as I got to play with my food! ^^

Wikipedia has more info about tonkatsu, including cheese tonkatsu:

Tonkatsu (豚カツ, とんかつ or トンカツ, pork cutlet), is a Japanese food which consists of a breaded, deep-fried pork cutlet. There are two main types, fillet and loin. It is often served with shredded cabbage. Tonkatsu originated in Japan in the 19th century. As well as being served as a single dish, it is also used as a sandwich filling or in combination with curry.

Early katsuretsu was usually beef; the pork version was invented in Japan in 1899 at a restaurant called Rengatei in Tokyo. It was originally considered a type of yōshoku—Japanese versions of European cuisine invented in the late 19th and early 20th centuries—and was called katsuretsu (cutlet) or simply katsu. The term “tonkatsu” (pork katsu) was coined in the 1930s.

Either a pork fillet (ヒレ hire) or pork loin (ロース rōsu) cut may be used; the meat is usually salted, peppered, dredged lightly in flour, dipped into beaten egg and then coated with panko (bread crumbs) before being deep fried. Tonkatsu is generally served with shredded cabbage. It is most commonly eaten with a type of thick Worcestershire sauce called tonkatsu sauce or simply sōsu (sauce), karashi (mustard) and perhaps a slice of lemon. It is usually served with rice, miso soup and tsukemono and eaten with chopsticks. It may also be served with ponzu and grated daikon instead of tonkatsu sauce.

Variations on tonkatsu may be made by sandwiching an ingredient such as cheese or shiso leaf between the meat, and then breading and frying. For the calorie conscious, konnyaku is sometimes sandwiched in the meat.