My family wanted to go out for dinner and asked me for suggestions. I turned to Yelp and found a Pacific Islander restaurant that opened two months ago!

The term ‘Pacific Islander’ includes Native Hawaiians, Samoans, Chamorro, Tongans, Fijians, and more. I asked the cashier which cuisine they focused on, and he said it was more of a fusion as the main dish is Pacific Islander, with Asian and/or American side dishes. He also said their Chicken Kelaguen (#6 on their menu with two side dishes, for $9.99 USD) was Guamanian/Chamorro; the grilled chicken is marinated and served cold, and best eaten with their bacon red rice! 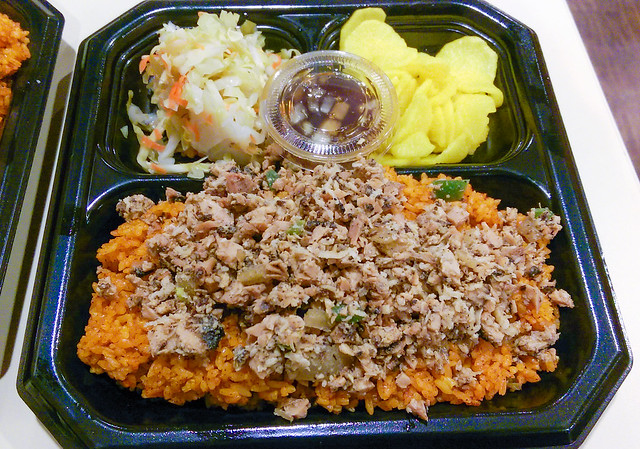 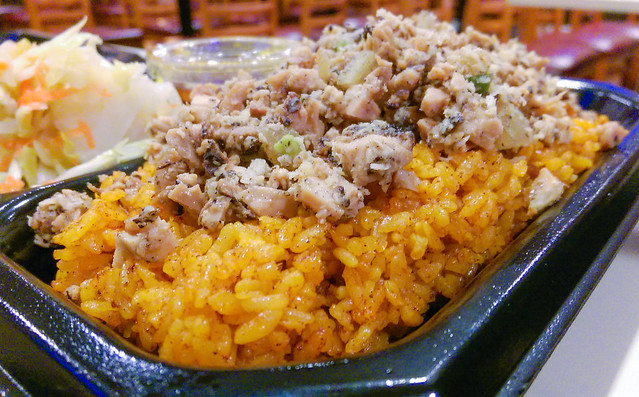 We had three dishes with different side dishes; our Chicken Kelaguen (pictured above) had cole slaw and radish kimchi. There was also a soy-based condiment served with all the dishes called finadene; Wikipedia tells us more about this special sauce:

Finadene (also fina dene) is a salty, spicy, sour all-purpose condiment used in Chamorro cuisine. The three types are soy sauce, lemon, and coconut, and it is often eaten with meat.

Here’s a short info about kelaguen, from Wikipedia:

Kelaguen is a Chamorro dish from Guam and the Mariana Islands eaten as a side dish or as a main course. A pickling marinade of lemon juice, fresh coconut, green onions, salt and hot red chili peppers or donne dinanche is used to marinate cooked chicken, raw shrimp, fish or beef. With the exception of the cooked chicken, the acids in the marinade “cook” the raw shrimp, fish or beef instead of heat. It is served cold or at room temperature and eaten as is, over rice, or wrapped in a warm corn or flour tortilla (or the Chamorro version, titiyas) with finadene on the side.

Though the Philippine dish “Kilawin” generally refers to fish served in a manner similar to Ceviche, a variant with roasted pork or goat meat cooked rare mixed with selected roasted offal is widely consumed as “pulutan” and viand in the Philippine island of Mindanao and the Visayas region.

Kelaguen is based on the “cooking” property of lemon juice, whereby raw fish or shrimp is “cooked” by the acidity of the lemon. This food preparation method is common to many Pacific islands people. It probably originated in Southeast Asia and was spread through migrations of people throughout the Pacific.

The first people in the Marianas likely used the kelaguen method primarily with fish. In the early 1900s Georg Fritz, who served as the German District Officer of Saipan, described a Chamorro dish “fala” that is similar to the modern version of fish kelaguen.

The banana flower (fafalu), when chopped, soaked in saltwater and boiled, is also prepared as a kelaguen dish; and probably was used in ancient times. Other seafood such as clams and shrimp are prepared in this manner. As meats were introduced by the Spanish administration in the 17th century, the principle of “cooking” in lemon juice adapted to the properties of these new foods. Today, Spam has become an accepted kelaguen dish, especially as a beer chaser.

Chamorros are known for kelaguen making skills. This dish is considered a signature local dish. Kelaguen’s popularity is evidenced when it is served as an appetizer or as part of the salad bar in several restaurants throughout the island whether or not they specialize in local food. One Chamorro family is known for preparing chicken kelaguen wrapped in taco-shell shaped titiyas (a Mexican tortilla) and selling them at local mom and pop stores and other establishments.

Kelaguen uses a combination of lemon juice, salt, and hot peppers to “cook” some type of fish, shrimp or meat. The Spanish introduced hot pepper to the Marianas. Chamorros had the knowledge of how to make sea salt.

Grated fresh coconut meat is often added to the recipe, especially to chicken and fish kelaguen. Deer and beef are prepared raw, and “cooked” in lemon juice as well. Chicken, however, is barbecued (grilled over a charcoal or wood fire) or boiled, then chopped, and lemon juice and salt added. Octopus and squid can be boiled prior to chopping. Grated coconut is usually, but not always, added to chicken and seafood. Some chefs use lechen niyok (coconut cream) instead of grated coconut to prepare certain types of seafood kelaguen.

Kelaguen is placed on the table depending on the ingredients used. Chicken kelaguen is usually placed after the barbecued chicken and other meats. Seafood is usually grouped together, after the barbecued fish. In large parties, it has become stylish to have a separate table with various kinds of seafood and kelaguen. (Kelaguen Spam is not considered a party food. It would remain in the back kitchen for beer drinkers to enjoy.)

Booniepepper’s red rice is unique to Guam, as explained by Diane Wilson:

What to Serve with Chicken Kelaguen

This is another tradition from Guam, and again it requires local produce. You can achieve the same thing by adding a teaspoon or two of paprika to the water in which you cook your rice. If your rice comes out rather orange, then you have Red Rice. Serve with finidini on the side.

On Guam, this would be fresh green beans mixed with small fresh fish that have been marinated in finidini, but not cooked. You can make an approximation of this dish using one part sardines to two parts green beans.

Posted on March 6, 2015 by Mango in Guam, Mariana Islands