The first time I heard about the Japanese croquette (コロッケ, korokke) was through Cooking Mama, when it was released for the Nintendo DS in September 2006. The game showed us how the croquette was made, and how simple it was.

Fastforward to February 2015! Mitsuwa was having a Customer Appreciation Event, selling a variety of popular Japanese street foods, seafood, and sweets. A relative posted the two photos below on Facebook, which made my sister and I drive down to San Jose to check it out!

We got to the market at ~5pm and noticed most of the food was selling out for the day. They still had a few croquettes, and we got a king crab croquette ($6 USD) to share. It was my first time having a legit Japanese croquette, and this one was as big as my hand! 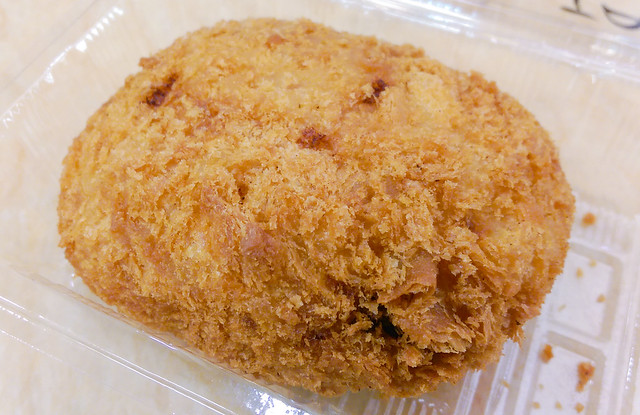 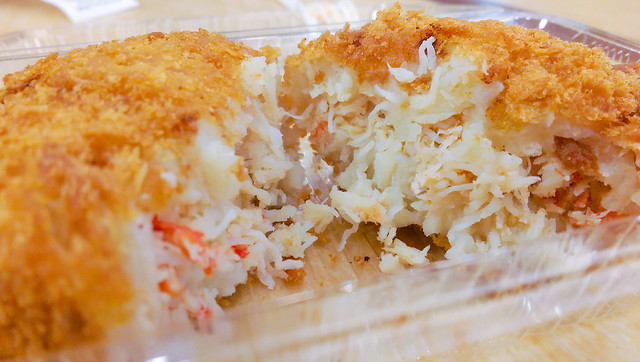 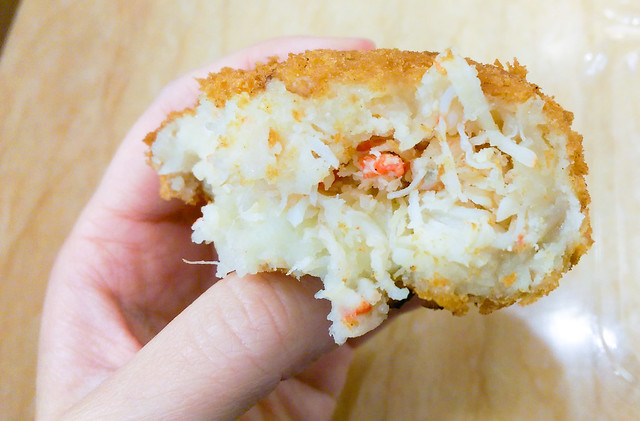 The croquette was lightly fried, soft, moist, and delicious! We wanted more, but we were full because we also had dessert from Matcha Love (also inside Mitsuwa).

Its history in Japan is not very precise. At first thought we conjectured that it may have been introduced along with tempura by the Portuguese in the mid 16th century. But it doesn’t appear to have been.

Most online sources put its introduction to Japan in the Meiji era (1869-1912). Apparently a recipe for korokke appears in an 1895 cookbook. Takaoka, a city in Gifu prefecture is making a bit of a claim as the place where where Japanese korokke started. There’s a local chain there promoting Takaoka korokke and they have a winter festival at their main temple where one of the featured foods is the daibutsu korokke (the big Buddha korokke). According to the Takaoka Korokke (the chain restaurant) business website there is a reference in a newspaper dated 1900 of a western-style restaurant selling korokke – on the second floor to be exact. It makes a bit of sense as Takaoka was an important port during the early industrialization of Japan. Seems like things western could have been easily introduced there.

Moving into the Taisho era, there was a novelty hit called “The Song of the Korokke” in 1917. The song’s popularity led to a popularity of consumption. This hit simultaneously with the introduction and popularization of kare risu and other things from beyond Japan’s borders.

Like many humble foods, there is an essence of the sublime in these mashed potato fritters. The Japanese stye can be perfectly simple or enhanced with either shrimp, crab or meat – often served with a squeeze of Bulldog Sauce, the sweet thick soy variation favored with fried foods. A personal favorite is korroke pan – your basic bun with a couple of korroke in it. We love our potatoes and bread.

Korokke can be found everywhere in Japan, as noted by Japanese Cooking 101:

Korokke is found at many stores in Japan like hot delis inside supermarkets, bento shops, convenience stores, etc. But the best place to buy Korokke is butcher shops. They usually have a small deep-frying set-up in the corner of a shop and sell it as they fry. Some freshly made Korokke from butcher shops may surpass home- cooking. Their Korokke is just so good! I don’t know but there might be some kind of secret ingredients that butchers don’t tell us. Early evenings is the busiest time for such shops for dinner shoppers and hungry middle or high schoolers seeking filling snacks.

Wikipedia also has some info on how croquette is served and eaten in Japan:

A relative of the croquette, known as korokke ( コロッケ ) is a very popular fried food, widely available in supermarkets and butcher shops, as well as from specialty korokke shops. Generally patty-shaped, it is mainly made of potatoes with some other ingredients such as vegetables (e.g. onions and carrots) and maybe less than 5% meat (e.g. pork or beef). It is often served with tonkatsu (とんかつ) sauce. Cylinder-shaped korokke are also served, which more closely resemble the French version, where seafood (prawns or crab meat) or chicken in white sauce (ragout) is cooled down to make it harden before the croquette is breaded and deep-fried. When it is served hot, the inside melts. This version is called “cream korokke” to distinguish it from the potato-based variety. It is often served with no sauce or tomato sauce. Unlike its French cousin, croquettes made mainly of meat are not called korokke in Japan. They are called menchi katsu (メンチカツ), short for minced meat cutlets.

2 thoughts on “Japan: Korokke (aka Croquette)”