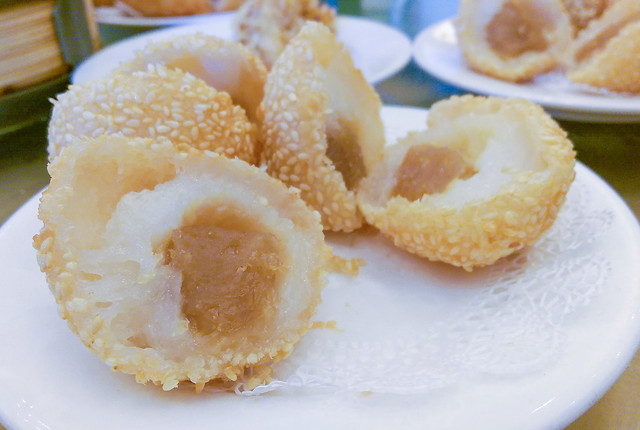 The main ingredients in the lotus paste are lotus seeds, water, sugar, and oil:

The process for making the paste is similar to that used to make smooth red bean paste. First, the dried seeds are stewed in water until soft and then mashed into a fine paste. The paste is then watered down to a thin slurry and passed through a sieve and into cheesecloth, with which it is squeezed dry. This produces a fine crumbly paste, which is then mixed with sugar or other sweeteners and often oil to produce a smooth, sweet paste.

The lotus paste used by most Chinese cooks requires further preparation by dry cooking the sweetened paste over heat with caramelized sugar and vegetable oil. This produces a lotus paste that is tan coloured with a satiny sheen, which is rich, sweet, and silky with a slight fragrance of caramel.

Lotus paste is used in Chinese cuisine as a filling for mooncake, baozi, and other sweet pastries. Another common use of lotus paste is as a filling for lotus seed buns, a dim sum item. Due to the higher price of lotus seeds, commercially prepared lotus pastes may also contain white kidney bean paste as a filler. There are different variations with some darker, close to black in color. Usually these have a deeper taste.

Did you know these sesame seed balls originated from Xi’an, in the Shaanxi province of China?

Jian dui (Mandarin) or jin deui (Cantonese), is a type of fried Chinese pastry made from glutinous rice flour. The pastry is coated with sesame seeds on the outside and is crisp and chewy. Inside the pastry is a large hollow, caused by the expansion of the dough. The hollow of the pastry is filled with a filling usually consisting of lotus paste (蓮蓉), or alternatively sweet black bean paste (hei dousha, 黑豆沙), or less commonly red bean paste (hong dousha, 紅豆沙).

Depending on the region and cultural area, jian dui are known as matuan (麻糰) in northern China, ma yuan (麻圆) in northeast China, and zhen dai (珍袋) in Hainan. In American Chinese restaurants and pastry shops, they are known as Sesame Seed Balls. They are also sometimes referred to as zhimaqiu (芝麻球), which translates to sesame balls in English.

The origins of jian dui can be traced back to the Tang dynasty as a palace food in Chang’an, known as lüdui (碌堆). This food item was also recalled in a poem by the Tang poet Wang Fanzhi. With the southward migration of many peoples from central China, the jian dui was brought along and hence became part of southern Chinese cuisine. In Hong Kong, it is one of the most standard pastries. It can also be found in most Chinatown bakery shops overseas.

Posted on February 1, 2015 by Mango in China, Shaanxi, Western China