Happy New Year!! Is there any particular type of dish that you eat on New Years?

Tteokguk is a traditional Korean dish eaten during the celebration of the Korean New Year. The dish consists of the broth/soup (guk) with thinly sliced rice cakes (tteok – it can be called a kind of rice pasta). It is tradition to eat tteokguk on New Year’s Day because it is believed to grant the consumer luck for the forthcoming year and gain a year of age. It is usually garnished with thin julienned cooked eggs, marinated meat, and gim (seaweed). —Wikipedia

We ended up finding that most restaurants sell tteokmanduguk (떡만두국), which is soup (guk, 국) with rice cake (tteok,떡) and dumplings (mandu, 만두). Further research shows that some Korean families also add mandu to their tteokguk:

My grandmother used to tell me that I couldn’t ring in the New Year without having some Tteok Manduguk (Korean Rice Cake and Dumpling Soup) according to Korean tradition. Who am I to argue with this long-standing tradition? —cHow Divine

Often, Koreans add mandu (Korean dumplings) to tteokguk, in which case the soup is called tteok-manduguk. You can use any kind of mandu in the soup. My favorite is kimchi mandu because of its pungent flavor and crunchy texture, which I think adds a nice contrast to the mildly flavored broth and soft rice cake slices. —Korean Bapsang 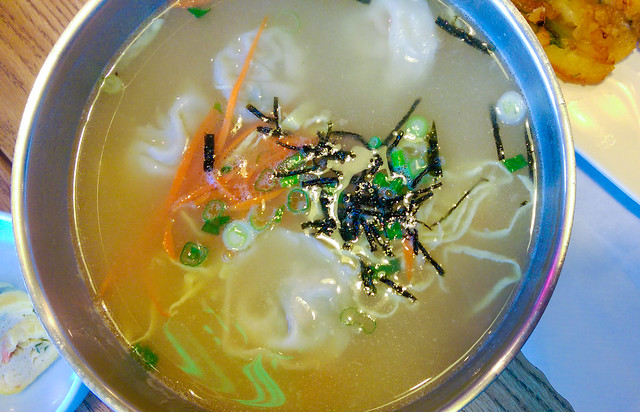 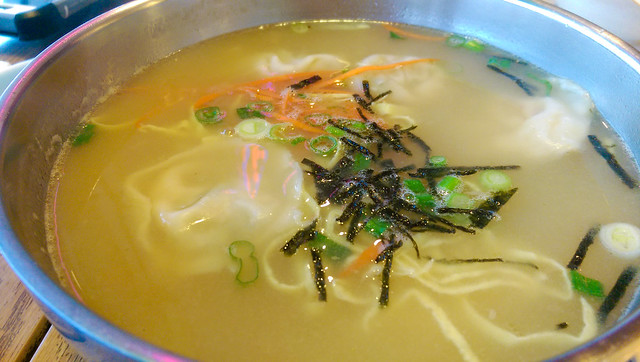 According to the 14th century records of Goryeosa (고려사), mandu had already been introduced via Central Asia during the Goryeo era. Mandu was called sanghwa (쌍화) or gyoja (교자) until the mid-Joseon Dynasty and became a local specialty of the Pyongan and Hamgyong regions, as both wheat and buckwheat — the main ingredients for flour — were mainly cultivated in the north. Mandu was made and cooked in various ways, including manduguk. —Wikipedia

In Korea people cook a rice cake soup called tteokguk on Lunar New Year’s morning. The soup has a clear beef-broth base, which becomes creamy and thick once the sliced rice cakes are simmered in the boiling broth.

There are several reasons why Koreans eat tteok guk on New Year’s Day. Traditionally, one more year of life was added on this day and eating a bowl of hot tteok guk was a must in order to do so. This custom originated from the belief that one must spend the first day of the year solemnly and cleanly. The white colored foods symbolize this rejuvenation.

In addition to this religious custom, sticks of rounded rice cake symbolized wealth and longevity. Cutting these rice cake sticks into pieces meant increased wealth, since the round shape of sliced rice cake resembled coins.

Cooking tteokguk also saved a lot of time for busy housewives and serving this simple, yet nutritious, New Year’s breakfast eased the weighty burden of feeding their family.

Eating Tteok guk today is more than just tradition. According to a nutritionist, “tteokguk was an excellent dish to feed the family a nutritious meal during the winter. The beef and rice cake makes such a great combination. The beef is rich in protein and minerals that improve metabolism and bone health. Rice cake is a great source of carbohydrates.” Clearly, the dish reflects the wisdom of older generations who first created tteokguk.