I took my mother and sister out for shopping at MUJI in Downtown San Jose. Afterwards, we went to get some nem nướng cuốn and a early dinner!

I ordered hủ tiếu dai, tôm, cua khô. The dish name translates as ‘chewy noodles, shrimp and crab, dried’. The ‘chewy noodles’ refer to the glass/clear noodles, which are translucent and chewier than bánh phở (phở noodles). And by ‘dried’, I  was referring to the dish with soup on the side.

You can also order hủ tiếu with soup if that’s your preference. If that’s the case, the dish would be called hủ tiếu dai, tôm cua, nước, with the latter word translated as ‘water’. 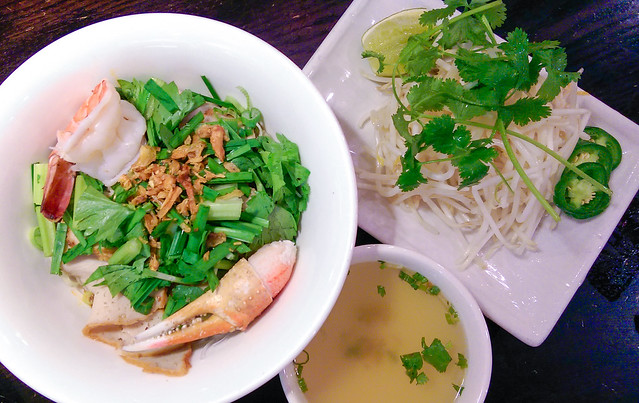 The dried version of hủ tiếu comes with soup on the side. We pour the soup inside the bigger bowl, to let the shrimp and crab flavor seep into the noodles. This also somewhat softens the noodles.

And here’s the aftermath of pouring the soup. Notice how the clear/glass noodles aren’t translucent anymore? The noodles have now absorbed the sauce and the soup. 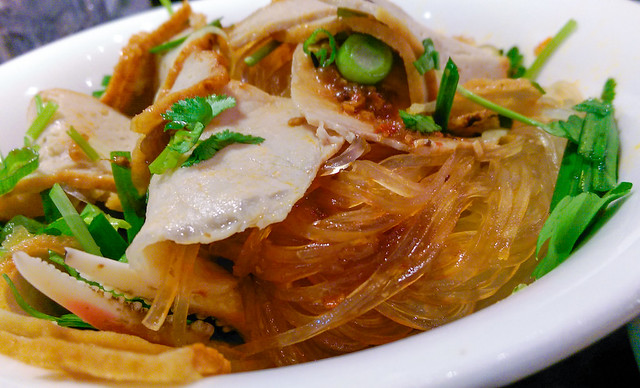 This noodle dish is one of my favorite dishes which harkens from vùng đất chín rồng the land of the 9 dragons (aka Mekong Delta) of Hokkien-Khmer origin. It is a specialty attributed to Bà Năm Sa Đéc / Mrs. Five of Sa Dec. Who this mythical Bà Năm / Mrs. Five is, I don’t know; it’s very common in the South to call people by their birth order rather than their personal/intimate name and when they’re married by their spouse’s birth order depending on which one you are related to or know (Vietnam is a relational language so the pronouns are not fixed but based on one’s relationship).

The glass noodles are served with ground pork in a tomato paste base with shrimp and served with a side of pork broth, though chicken or beef broth could be substituted.

Here’s an interesting article from The Guardian:

The rice noodle soup, a specialty of the Mekong Delta, tells the tale of the changing economy and environment in the region.

On a visit last month to the town of My Tho, the capital of the Tien Giang province in Vietnam’s Mekong Delta, I found a riverside restaurant that served the local specialty, a dish called hu tieu. It’s a delicious soup, dense with stretchy rice noodles and topped with succulent locally farmed shrimp.

These two ingredients of hu tieu have set the delta on a remarkable path to prosperity. In provinces like Tien Giang and neighboring Ben Tre, as one drives east toward the South China Sea, the landscape is stitched together with fertile rice paddies and brackish ponds teeming with shrimp. This transformation has taken place in just one generation.

“Originally it was rice that was pushing into these areas,” Wyatt said, “but in more recent years it’s been shrimp.”

As farmers cut down the mangrove buffer to make way for aquaculture, storm surges and increasingly frequent typhoons can swamp the embankments that used to shield farm fields from saltwater. In some parts of the delta, the shoreline is now being pushed back by as much as 100 meters (109 yards) a year.

It’s no wonder so many farmers have switched to shrimp. Not only can shrimp thrive in saltier water – and farmers are increasingly introducing more salt-tolerant species, such as white-legged shrimp – but earnings from shrimp can be five or seven times higher than from a comparable acreage of rice, according to Ngo Thi Phuong Lam, an agriculture expert at Vietnam National University in Ho Chi Minh City. Despite the high start-up costs, the lure of quick profits continues to prove irresistible.