I went to the Hong Kong Heritage Museum in Sha Tin with a friend, which had exhibits on Cantonese opera, HK’s history, and Bruce Lee. Then we went back to New Town Plaza to do some last minute shopping before I leave HK back to SFO. We stopped at the food court and got a light snack from Yakimasse.

This was actually my first time having okonomiyaki! It had lots of noodles and cabbage. Yakimasse also served their okonomiyaki with Japanese mayo and dried bonito shavings on top. 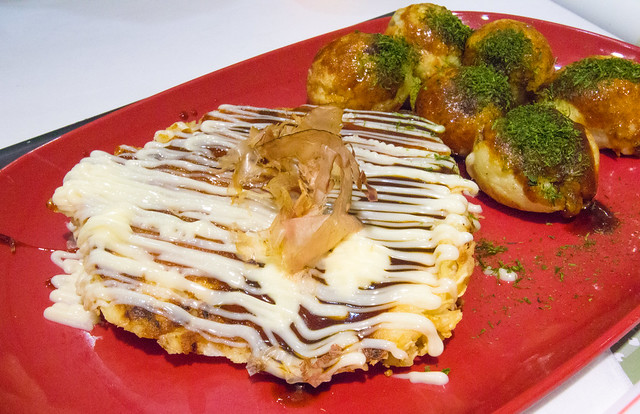 Wikipedia has more info on okonomiyaki and the Hiroshima style okonomiyaki:

Okonomiyaki (お好み焼き) is a Japanese savoury pancake containing a variety of ingredients. The name is derived from the word okonomi, meaning “what you like” or “what you want”, and yaki meaning “grilled” or “cooked” (cf. yakitori and yakisoba). Okonomiyaki is mainly associated with the Kansai or Hiroshima areas of Japan, but is widely available throughout the country. Toppings and batters tend to vary according to region. Tokyo okonomiyaki is usually smaller than a Hiroshima or Kansai okonomiyaki.

In Hiroshima, the ingredients are layered rather than mixed. The layers are typically batter, cabbage, pork, and optional items such as squid, octopus, and cheese. Noodles (yakisoba, udon) are also used as a topping with fried egg and a generous amount of okonomiyaki sauce. The amount of cabbage used is usually three to four times the amount used in the more common Osaka style. It starts out piled very high and is pushed down as the cabbage cooks. The order of the layers may vary slightly depending on the chef’s style and preference, and ingredients vary depending on the preference of the customer. This style is also called Hiroshima-yaki or Hiroshima-okonomi.

Posted on October 2, 2014 by Mango in Chūgoku, Hiroshima, Japan