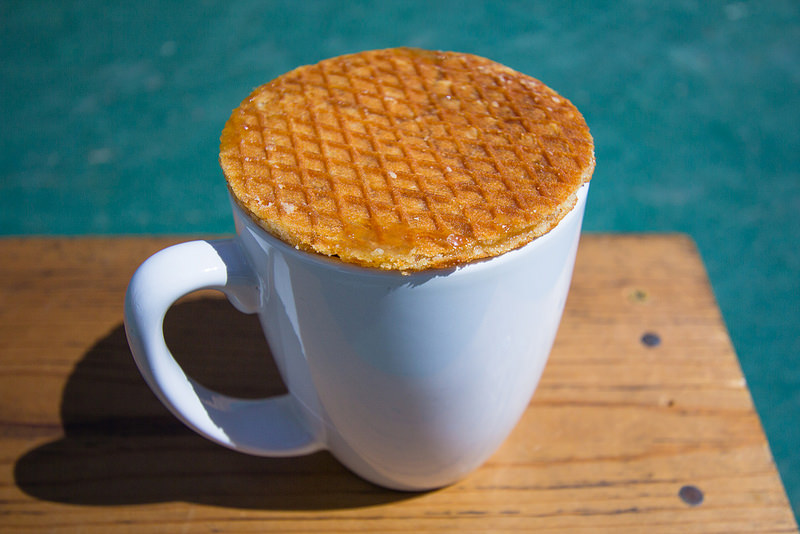 A friend gave my sister and I packs of stroopwafel, or wafel for short, from Rip van Wafels.

They’re basically thin waffles with a layer of syrup in the middle, and eaten with a cup of coffee. 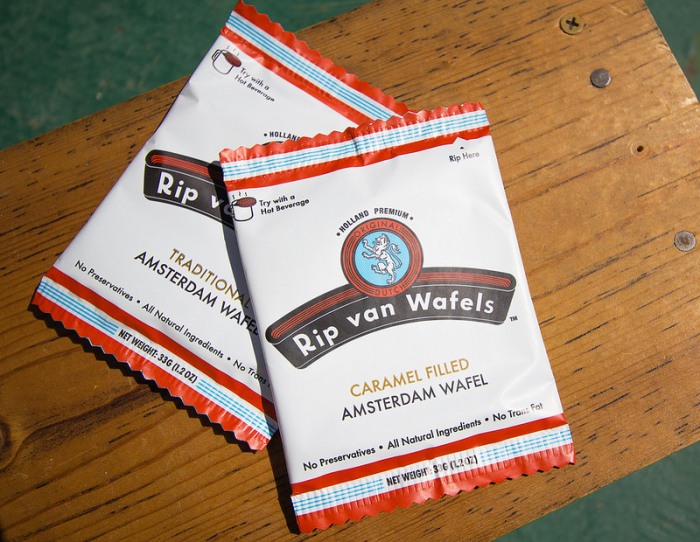 A wafel is placed on the top of your cup to let the steam warm up the syrup or filling, before consumption! The wafel is gooey and chewy, yet slightly crispy at the same time. 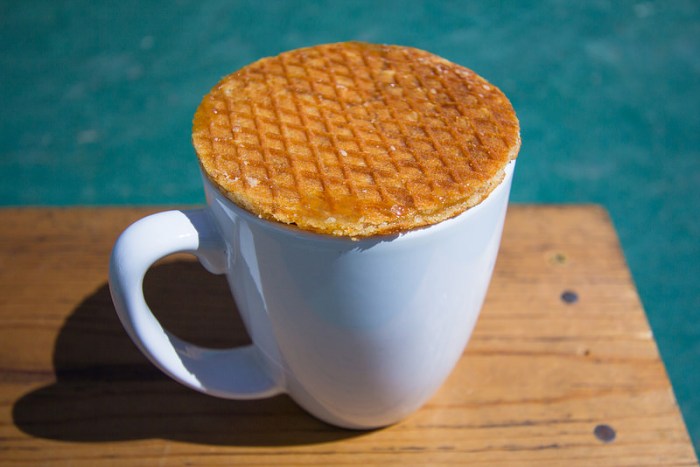 Rip van Wafels is based in San Francisco, and folks in the SF Bay Area can get them from Whole Foods, Peets, and Bi-Rite (the market, not the creamery). You can also order online, if you’re not in the area.

More info about stroopwafel, from Wikipedia:

A stroopwafel (Dutch pronunciation: [ˈstroːpʋaːfəl]) (English translation: syrup waffle, treacle waffle, or caramel waffle; lit “syrup waffle”) is a waffle made from two thin layers of baked dough with a caramel-like syrup filling in the middle. They were first made in Gouda in the Netherlands. Large versions are sold in the streets as a snack.

The stiff dough for the waffles is made from flour, butter, brown sugar, yeast, milk, and eggs. Medium sized balls of dough are put into a heated waffle iron and pressed into the required uniformly thin, round shape. After the waffle has been baked, and while it’s still warm, it is split into thin layered halves. The warm filling, made from syrup, brown sugar, butter, and cinnamon, is spread between the waffle halves, gluing them together.

The stroopwafel originates from Gouda in the Netherlands. It was first made during the late 18th century or early 19th century by a baker using leftovers from the bakery, such as breadcrumbs, which were sweetened with syrup. One story ascribes the invention of the stroopwafel to the baker Gerard Kamphuisen, which would date the first stroopwafels somewhere between 1810, the year when he opened his bakery, and 1840, the year of the oldest known recipe for syrup waffles. In the 19th century, there were around 100 syrup waffle bakers in Gouda, which was the only city in which they were made until 1870. After 1870 they were also made at parties and in markets outside the city of Gouda. In the 20th century, factories started to make stroopwafels. In 1960, there were 17 factories in Gouda alone, of which four are currently still open.

Posted on September 1, 2014 by Mango in Netherlands