My sister, two friends, and I decided to try something ‘exotic’ and had lunch at an Ethiopian restaurant by Lake Merritt. Finding free parking around Lake Merritt on a weekend is no small feat! I drove around for an hour until I gave up and parked across the restaurant at a parking meter. The parking meters have been updated with today’s tech, so it accepts credit cards! Hooray for carrying no coins!

We ordered four different dishes, and one appetizer. Our table was given bowl of whole wheat injera. 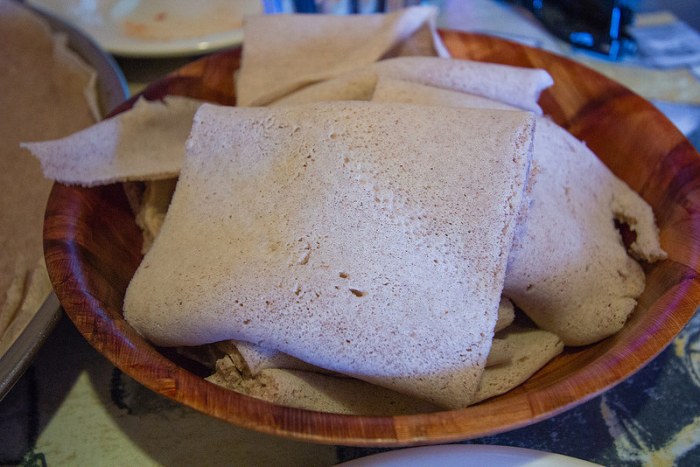 None of us had tried Ethiopian food before (in a restaurant setting). When we took a bite of injera for our first time, we were all intrigued by the taste and texture of it!

Ethiopians and Eritreans eat with their hands, and use injera to grab and scoop the food off the plate. The sticky and spongy side of injera helps with grabbing the food, so the food doesn’t fall out.

At Enssaro, injera was also used as a lining on a large round plate to hold the food in place. 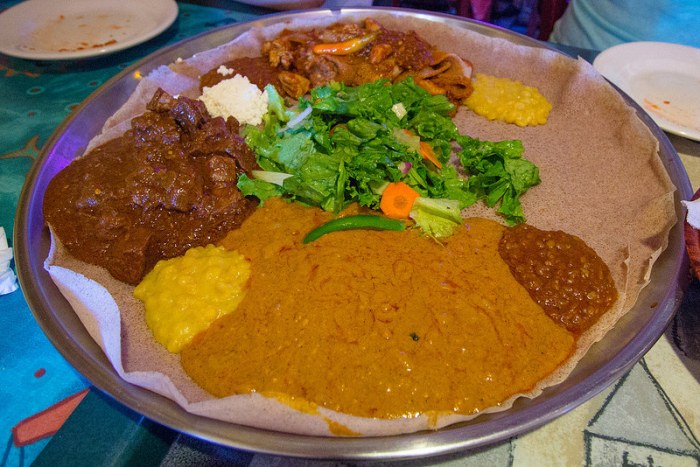 Injera (Amharic, Tigrinya: እንጀራ ənǧära [ɨndʒəra], sometimes transliterated as enjera) is a sourdough-risen flatbread with a unique, slightly spongy texture. Traditionally made out of teff flour, it is a national dish in Ethiopia and Eritrea.

The most valued grain used to make injera is from the tiny, iron-rich teff. However, its production is limited to certain middle elevations and regions with adequate rainfall, so it is relatively expensive for the average household. As many farmers in the Ethiopian highlands grow their own subsistence grain, wheat, barley, corn, and/or rice flour are sometimes used to replace some or all of the teff content. There are also different varieties of injera in Ethiopia, such as nech (white), kay (red), and tikur (black).

In Eritrea and Ethiopia, a variety of stews, sometimes salads (during Ethiopian Orthodox fasting, for which believers abstain from most animal products) or simply more injera (called injera firfir), are placed upon the injera for serving. Using one’s right hand, small pieces of injera are torn and used to grasp the stews and salads for eating. The injera under these stews soaks up the juices and flavours of the foods and, after the stews and salads are gone, this bread is also consumed. Injera is thus simultaneously food, eating utensil, and plate. When the entire “tablecloth” of injera is gone, the meal is over.