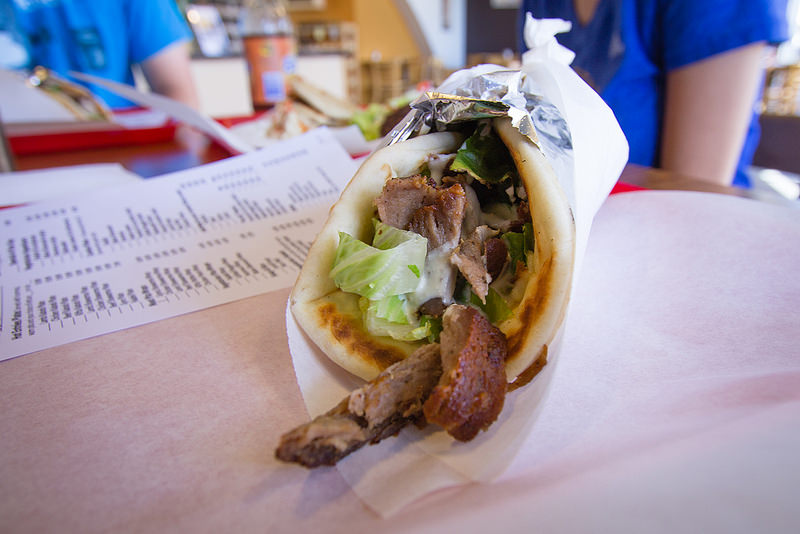 I had Greek for lunch with my sister and a few of her friends! I highly recommend Jaffa for traditional Greek dishes, and Petra for modern Greek dishes.

I love Jaffa’s gyros! Gyros are typically pieces of meat with lettuce and tzatziki, wrapped with a pita. Jaffa has different types of meat to choose from- lamb & beef, lamb, chicken, beef, kifta (beef patties), or chicken pesto.

I had the lamb & beef gyros, wrapped with a pita. The pita was soft and moist, while the meat was tender and flavorful! 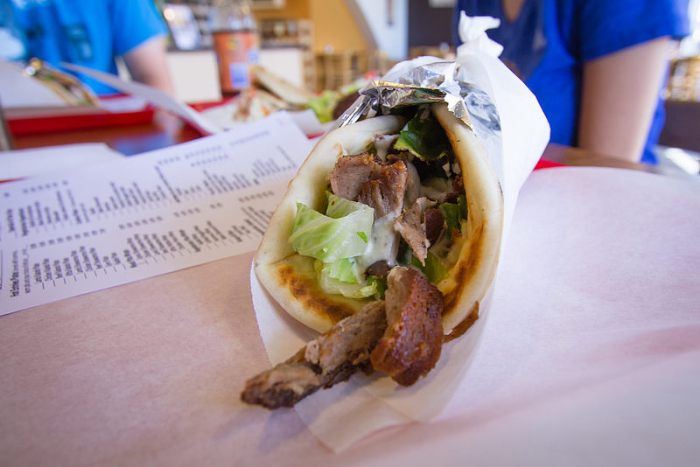 A gyro is a Greek dish of meat roasted on a vertical spit. It is commonly served in a sandwich with tomato, onion, and tzatziki sauce.

The name comes from Greek γύρος (‘turn’), a calque of the Turkish döner meaning “turn”, a name which was previously used in Greece, spelled ντονέρ [doˈner]. The Greek pronunciation is [ˈʝiros], but the pronunciation in English is often /ˈdʒaɪroʊ/ or, occasionally /ˈɡɪəroʊ/ or /ˈjɪəroʊ/.[4] The final ‘s’ of the Greek form is often reinterpreted as a plural in English.

In Greece and Cyprus, the meat is typically pork or occasionally chicken; with veal gyros occasionally found, referred to as “doner” (ντονέρ). In Athens, and most of Greece, a “pita gyro” will contain tzatziki, tomato, onion and fried potatoes in addition to the meat. However some places offer alternatives to the classic ingredients: tzatziki sauce as a dressing for other meats, whereas the chicken dressings vary from shop to shop, but are most often a variant on mayonnaise mixed with mustard, called “σως” (sauce) in Greek.

Pitas are available in at least three types: ‘plain’, ‘Cypriot’, and ‘Arabic’ in some chain restaurants, however in most places only ‘Plain’ is offered. ‘Plain’ pita is around 20 cm in diameter and the thickest of the three. ‘Cypriot’ pita is crisp and has larger size, and is split like pocket bread. ‘Arabic’ pitas are crisp, and the flattest and largest. Gyros are also served in sandwich-type bread in northern Greece.

It is said that in Thessaloniki one will find the biggest pita and gyros; there, an order will typically include tomato, onion, fried potatoes, mustard and/or ketchup and an optional sauce, most commonly tzatziki or ktipití (a feta cheese and hot pepper dip), in addition to the meat. “Russian salad” (a mixture of diced pickles and mayonnaise) and “Hungarian salad” (a mixture of mayonnaise and diced bacon) are also popular.

On the island of Crete, pork meat is the most popular filling, although in some of the larger cities (notably the city of Chania) there are also chicken alternatives. In Kos, a Greek island in the Aegean sea, the locals wrap chicken and add fried potatoes to gyros. In other Greek cities, like Patras, where gyros are not as popular, the wrap is often prepared and then put in a toaster or toasted under a press, like a panino, a popular grilled sandwich throughout Europe. In Kalamata, it can sometimes be eaten in Thrakópsomo (bread baked on embers), a thick round loaf of country style bread, cut in two halves and stuffed with a double serving of Gyro meat.