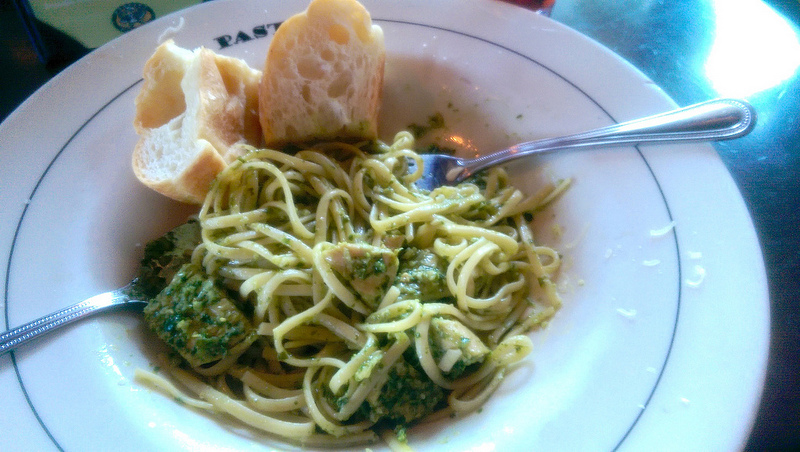 For dinner, Beeta and I went to an Italian restaurant at a shopping mall near her apartment. I was starving from walking all over Downtown and the Pearl District.

I ordered linguine with basil pesto, which had the description “fresh, fragrant basil is the star in this traditional dish from the Liguria region” on the menu. The dish was listed in the vegetarian section, but there was a note for adding chicken for an additional cost. 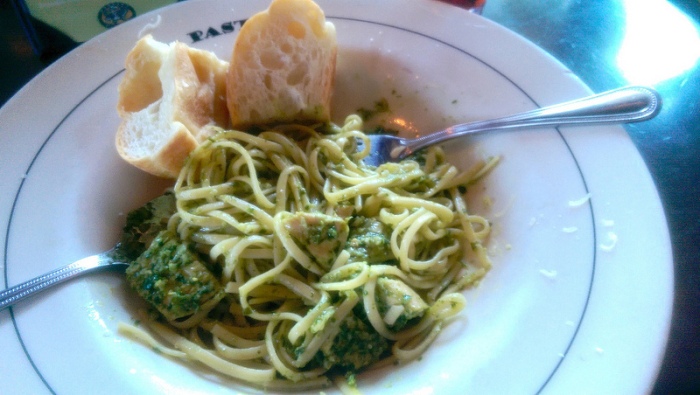 Please excuse the blurriness of the photo… It was taken on my phone instead of the 60D. I also took it after I had started eating, as I was hungry… ;)

I really liked how small this dish was! It was a perfect size, enough to make me satisfied and not overly full. The prices are also affordable and not overpriced. I usually find myself taking leftovers home from Italian restaurants, but not from this one. So, if you’re used to eating bigger portions, I would order an appetizer at Pastini Pastaria.

An Italian coworker said he typically eats pesto with linguine only. So the addition of chicken must be an Italian-American thing. Here’s some more info about pesto, from Wikipedia:

Pesto is traditionally prepared in a marble mortar with a wooden pestle. First, garlic and pine nuts are placed in the mortar and reduced to a cream, then the washed and dried basil leaves are added with coarse salt and ground to a creamy consistency. Only then is a mix of Parmigiano-Reggiano and Pecorino added. To help incorporate the cheese a little extra-virgin olive oil is added. In a tight jar (or simply in an air-tight plastic container), covered by a layer of extra-virgin olive oil, pesto can last in the refrigerator up to a week, and can be frozen for later use.

Pesto is commonly used on pasta, traditionally with Mandilli de Sæa (Genovese dialect – literally “silk handkerchiefs”), trofie or trenette. Potatoes and string beans are also traditionally added to the dish, boiled in the same pot in which the pasta has been cooked. It is sometimes used in minestrone. Pesto is sometimes served with sliced beef tomatoes and sliced boiled potatoes.