This is perhaps a post many of you are familiar with! Gỏi cuốn, also known as spring rolls, was one of the appetizers we had during dinner.

Gỏi cuốn is a rice paper roll that typically contains shrimp, pork, vermicelli, mint leaves, chives, and bean sprouts. It’s also to be eaten after it’s prepared, when the rice paper is still soft. The rice paper will harden over time. Gỏi cuốn is also served with a peanut-hoisin sauce. Some people may opt to eat it with nước mắm. 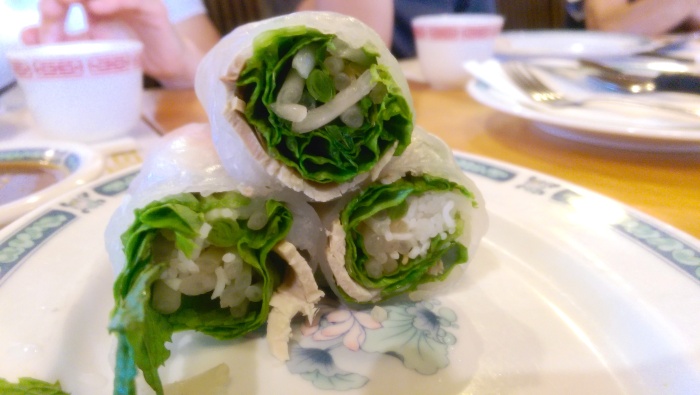 Here’s some info, from Wikipedia:

The banh trang is dipped in water, then laid flat on a plate and the desired amount of ingredients is placed on top. The fresh gỏi cuốn is then rolled up and ready to be eaten. Gỏi cuốn can be served with tương xào (also known as hoisin sauce), which consists of ground tương (tương đen or tương xay)and mixed coconut water (or broth), before being stir-fried with garlic and some sugar and then sprinkled with chili powder and ground peanuts. Alternatively, gỏi cuốn can be served with peanut sauce or other Vietnamese dipping sauces, such as nước chấm, a condiment based on fish sauce.

In Vietnam and in various parts of Southeast Asia, Vietnamese can be seen hand-making banh trang (rice paper) and placing them on the rectangular bamboo trays around their houses. Traditionally, gỏi cuốn are eaten with a large group of people at a home setting.

Fresh rolls are easily distinguished from similar rolls by the fact that they are not fried and the ingredients used are different from (deep-fried) Vietnamese egg rolls. Fresh rolls have gradually become more popular in neighboring Cambodia, Thailand, and Laos as well as in Canada and the U.S. or wherever there are a significant concentrations of the Vietnamese diaspora. Its popularity is also partly due to several websites promoting Vietnamese food by tourists as well as Southeast Asian food experts and by word of mouth. In Cambodia, Vietnamese gỏi cuốn are called nime chao, derived from the Vietnamese word nem. In Japan, they are called nama harumaki (生春巻き, “raw spring rolls”), and are typically filled with shrimp.

These rolls are also really simple and easy to make at home. Here are some recipes: