After dinner at Saigon Seafood Harbor Restaurant, I went with my sister to get shaved snow for dessert! And to meet up with some awesome friends!

Just three years ago, the closest place to get shaved snow was in Dublin and San Francisco. That’s not the case anymore…there’s been tons of shaved snow places popping up everywhere in the South Bay the past year or two!

Sno-Crave calls their xue hua bing as “Shaved Snow” and explains what it is:

Shaved Snow is a cross between ice cream and the traditional shaved ice desserts popular in Hawaii and Asia, snow ice features soft ribbons of flavored ice topped with fruit, nuts and other assorted goods.

We got the yogurt shaved snow with condensed milk and Oreo topping. You may be thinking, “yogurt?!” My sister suspected that it was the Asian yogurt like the Yakult, and she was right.

Doesn’t that look yummy?! The Oreos went really well with the yogurt flavor. It felt like we were eating ice with cookies ‘n cream! Sno-Crave had a couple of board games; we played two rounds of Uno! 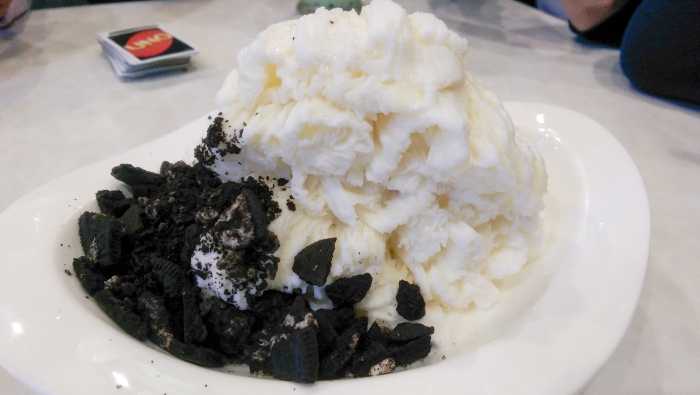 I’ve had green tea (matcha) shaved snow with azuki beans at the Fremont Sno-Crave location in the past, which was good too!

SF Gate did an article about the Taiwanese dessert two years ago:

The cold and creamy Taiwanese dessert, also known as shaved snow or xue hua bing, has been popping up on the food radars from San Francisco to Dublin over the past year.

A cross between ice cream and the traditional shaved ice desserts popular in Hawaii and Asia, snow ice features soft ribbons of flavored ice topped with fruit, nuts and other assorted goods.

But if you’re having a hard time picturing the unfamiliar dessert, don’t despair. You’re not alone.

“We have a poster outside our store, and people thought it was a crepe at first,” says Janice Kou, owner of the year-old Snowflake in Dublin. “The green-tea-flavored snow ice – they thought that was lettuce.”

Neither a crepe nor a vegetable, of course, snow ice is simply the next generation of Asian shaved-ice desserts.

Whereas traditional shaved ice is made by grinding ice, then flavoring it with fruit syrups or condensed milk, snow ice starts out closer to ice cream.

Flavorings such as green tea or chocolate are mixed into a base of milk and water, then frozen into cylindrical blocks that look like giant candles. The blocks are mounted onto an ice shaver, which slices it off in sheets – thin enough that they melt in the mouth, much like cotton candy.