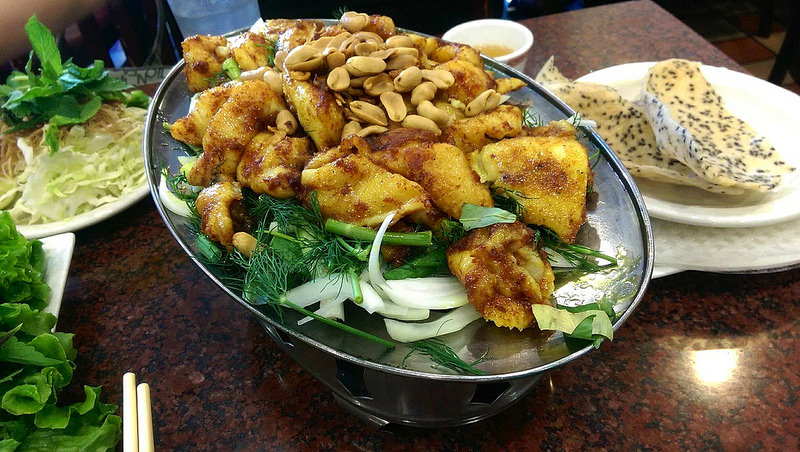 I treated my parents to some delicious Northern Vietnamese dishes for their 32nd anniversary! (Happy anniversary, Mom & Dad!) My parents rarely venture out to San Jose so whenever we’re in town, I’ve gotta take them to a place with good eats!

Thien Long is by Eastridge Mall, and they have a fantastic fish dish. Called “Bún Chả Cá Lã Vọng”, it is grilled fish with dill, onion, peanuts and served with thin noodle and vegetables. The dish is placed above a fire pit to stay hot. You also have the option of getting the rice paper (bánh tráng) to eat with the fish. It’s a quite big dish and serves 2 people, or 3 people if you order another dish for the table. 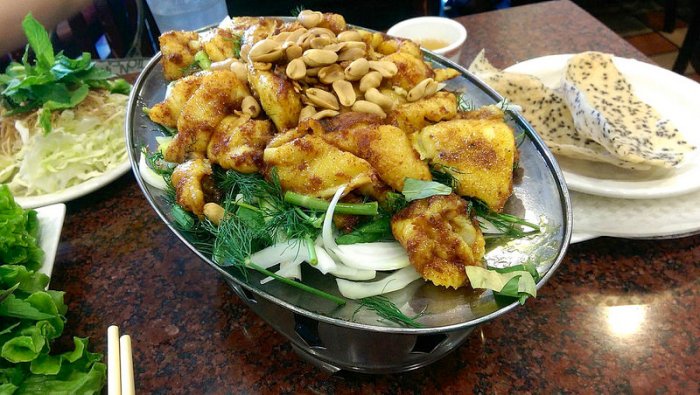 Here’s a short history of the dish, from About.com:

Unlike pho and bun cha, this dish has no natural counterpart in the south – cha ca la vong is proudly homegrown by Hanoians, the brainchild of the Doan family, who continue to make it in a restaurant that serves only that one dish.

Cha ca la vong is redolent of dill, turmeric, and revolution: the dish was legendarily prepared to nourish North Vietnamese insurgents, and after reunification, the Doan family was allowed to make cha ca la vong on a street newly renamed after their product. (The street was formerly Hang Son, or “Paint Street”; the whole street is now called “Cha Ca”.)

The cha ca la vong experience is more theatrical than most other culinary treats in Hanoi. In cha ca la vong restaurants (there are more than one; in imitation-happy Hanoi, plenty of other copycats have followed in the Doans’ footsteps), guests sit at tables equipped with gas or charcoal burners. Marinated fish (preferably snakehead) are cooked right in front of the guests, first browned in oil, then enhanced with ginger, dill, green onions, and other herbs. The finished dish is served alongside rice noodles, coriander, fennel, peanuts, leeks, chili, and shrimp paste.

The original Cha Ca La Vong restaurant is still the best place to experience this fish and veg concoction; the interior is shabby and the servers are snippy with the guests, but it’s all part of the show. Eat it while it’s hot.

Posted on June 29, 2014 by Mango in Northern Vietnam, Vietnam