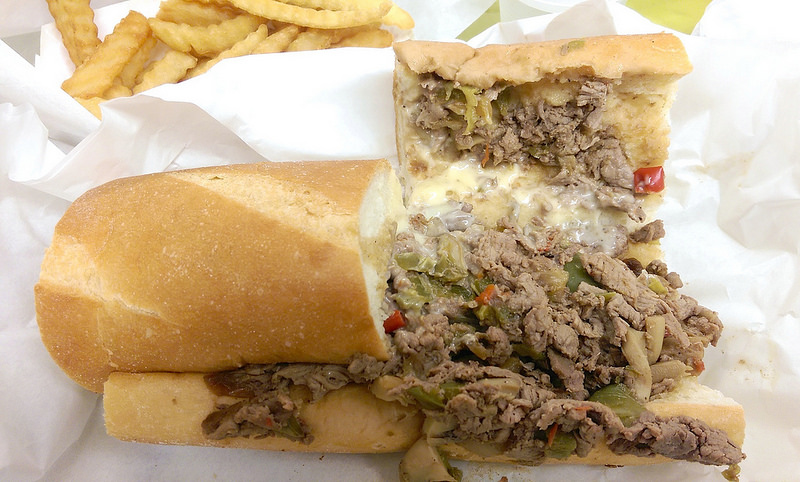 I grabbed a cheesesteak from Amato’s with a few coworkers! We went to the original location on Saratoga Ave; they now have a second location on Almaden Rd.

I got “The Works”, which includes mushrooms, bell peppers, onions, cheese, and steak. They also had two jars of self-serve peppers; one jar has sliced spicy peppers while the other is uncut and on the sweeter side. 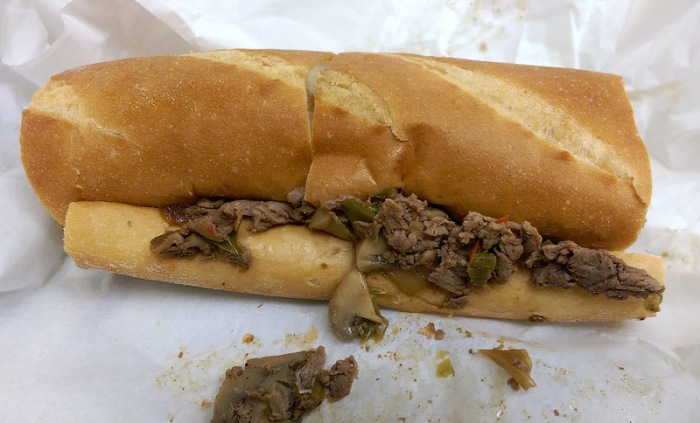 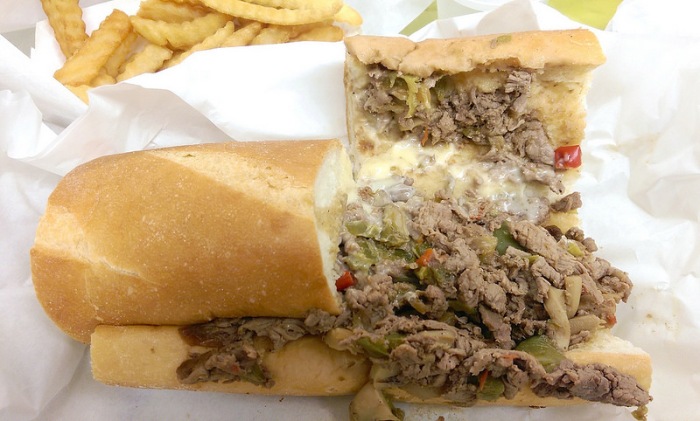 Read on for background info about the cheesesteak, from Wikipedia:

A cheesesteak, also known as a Philadelphia cheesesteak, Philly cheesesteak, cheesesteak sandwich, cheese steak, or steak and cheese, is a sandwich made from thinly-sliced pieces of steak and melted cheese in a long roll. A popular regional fast food, it has its roots in the city of Philadelphia, Pennsylvania.

The cheesesteak was developed in the early 20th century “by combining frizzled beef, onions, and cheese in a small loaf of bread,” according to a 1987 exhibition catalog published by the Library Company of Philadelphia and the Historical Society of Pennsylvania.

Philadelphians Pat and Harry Olivieri are often credited with inventing the sandwich by serving chopped steak on an Italian roll in the early 1930s. The exact story behind its creation is debated, but in some accounts, Pat and Harry Olivieri originally owned a hot dog stand, and on one occasion, decided to make a new sandwich using chopped beef and grilled onions. While Pat was eating the sandwich, a cab driver stopped by and was interested in it, so he requested one for himself. After eating it, the cab driver suggested that Olivieri quit making hot dogs and instead focus on the new sandwich. They began selling this variation of steak sandwiches at their hot dog stand near South Philadelphia’s Italian Market. They became so popular that Pat opened up his own restaurant which still operates today as Pat’s King of Steaks. The sandwich was originally prepared without cheese; Olivieri claims provolone cheese was first added by Joe “Cocky Joe” Lorenza, a manager at the Ridge Avenue location.”

The meat traditionally used is thinly sliced rib-eye or top round, although other cuts of beef are also used. On a lightly oiled griddle at medium temperature, the steak slices are quickly browned and then scrambled into smaller pieces with a flat spatula. Slices of cheese are then placed over the meat, letting it melt, and then the roll is placed on top of the cheese. The mixture is then scooped up with a spatula, pressed into the roll, and cut in half. Common additions include sautéed onions, peppers, mushrooms, mayonnaise, hot sauce, salt, pepper and ketchup.

In Philadelphia, most cheesesteak places use Amoroso or Vilotti-Pisanelli rolls. One source writes that “a proper cheesesteak consists of provolone or Cheez Whiz slathered on an Amoroso roll and stuffed with thinly shaved grilled meat,” while a reader’s letter to an Indianapolis magazine, lamenting the unavailability of good cheesesteaks, wrote that “the mention of the Amoroso roll brought tears to my eyes.” After commenting on the debates over types of cheese and “chopped steak or sliced,” Risk and Insurance magazine declared “The only thing nearly everybody can agree on is that it all has to be piled onto a fresh, locally baked Amoroso roll.”

Posted on June 10, 2014 by Mango in Pennsylvania, United States