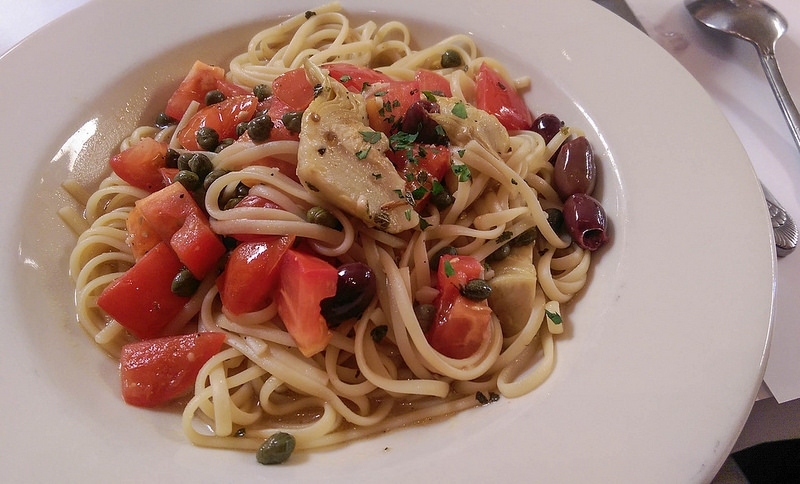 I went my coworkers to an Italian restaurant in Downtown Mountain View for a  birthday lunch!

I got Vasso Azzurro’s “Linguine Alla Erbe Con Verdure”, which had fresh tomatoes, artichoke hearts, capers, olives, roasted garlic, and red chili flakes. The dish overall was on the lighter side, as it had no meat (vegetarian) and had a white wine sauce.

Here’s some info about linguine, from Wikipedia:

Linguine is a form of pasta – like fettuccine and trenette, but elliptical in section rather than flat. It is wider than spaghetti, about 4 mm, but not as wide as fettuccine. The name linguine means “little tongues” in Italian, where it is a plural of the feminine linguina. Linguine are also called trenette or bavette. A thinner version of linguine is called linguettine.

Linguine originated in the Liguria region of Italy.

While spaghetti traditionally accompanies meat and tomato dishes, linguine are often served with seafood or pesto. Linguine is typically available in both white flour and whole-wheat versions; the latter are usually made in Italy.

One of my coworkers from Genoa (the capital of Liguria) said there’s thousands of different linguine recipes typical of every town, so one place would be slightly different from another; linguine with tomatoes, olives, and herbs is unique to Liguria.