Sweet & Yummy is a food truck that specializes in a Hungarian sweet pastry called chimney cake, or kürtőskalács in Hungarian. I came across this vendor through Yelp several weeks ago, and finally had the chance to check it out last night! It’s a bit tricky to find the food truck; it’s located in the Mountain View Target parking lot, on the edge next to Wheel Works. They only operate Friday and Saturday evenings, approximately 7 to 11pm.

Their chimney cake comes with three different toppings combined with sugar- cinnamon, coconut, and walnut. I got coconut and walnut. Even though it’s called a “cake”, the texture is more like thin sweet bread, and it’s shaped like a hollow, cylindrical, spiral tower. 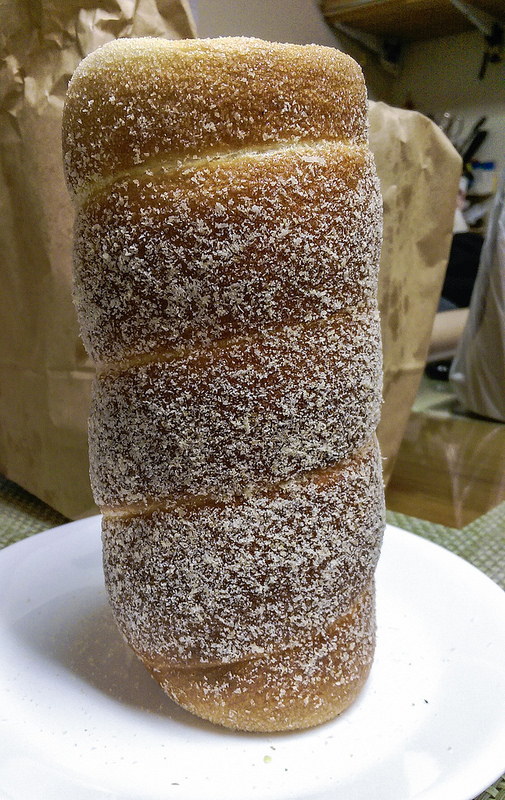 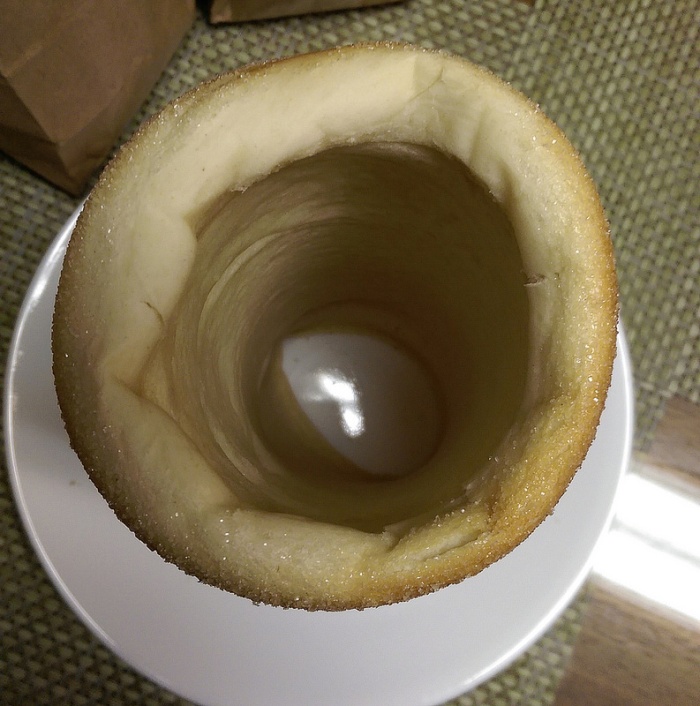 Here’s some info about kürtőskalács, from Wikipedia:

Kürtőskalács is a popular pastry specific to Hungarian-speaking regions, more predominantly, the Szekler land. Earlier a festive treat, now it is part of everyday consumption.

Kürtőskalács is made from sweet, yeast dough (raised dough), of which a strip is spun and then wrapped around a truncated cone–shaped baking spit, and rolled in granulated sugar. It is baked above charcoal cinders while lubricated with melted butter, until its surface gets a golden-brown color. During the baking process the sugar stuck on kürtőskalács becomes caramel and forms shiny, crispy crust on the cake. The surface of cake can then be provided with additional toppings such as ground walnut or cinnamon powder.

The Chimney Cake was originally born is Transylvania (present day Romania), while the territory was still part of present day Hungary. There are many different beliefs about its exact origins; one of these says that Kürtőskalács was first made by a clever Szekler (Székely) woman who saved the locals from starving to death while the Mongols (Tatars) invaded Hungary in 1241-1242. According to another belief (that is most probably the real truth) this pastry is only a few hundred years old and was first made by some Szekler families who wanted to make another use of the smouldering charcoal in their house. They put the charcoal onto their stovepipes and started to bake the pastry above that. A bit later this pastry became a traditional sweet on weddings and some family events both in Transylvania and in whole Hungary.

Nowadays Chimney Cake is usually sold on special events, carnivals and fairs by street vendors, but it is popular in bakeries and different pastry shops as well, not just in Budapest or Hungary.

The cake itself is not that hard to make and is usually topped by different sweet spices like cinnamon, coconut-sprinkles or walnuts. Sugar is caramelised on the surface of the pastry and then it is rolled into one of the above mentioned toppings. This way the whole Chimney Cake has a sweet and crispy surface and a very soft, almost creamy interior.

This pastry is a national symbol of Hungary, though it was registered by the European Union as a Protected Geographical Indication/Speciality (PGI) of Slovakia under a different name (Trdelnik).

Posted on May 3, 2014 by Mango in Hungary, Transylvania