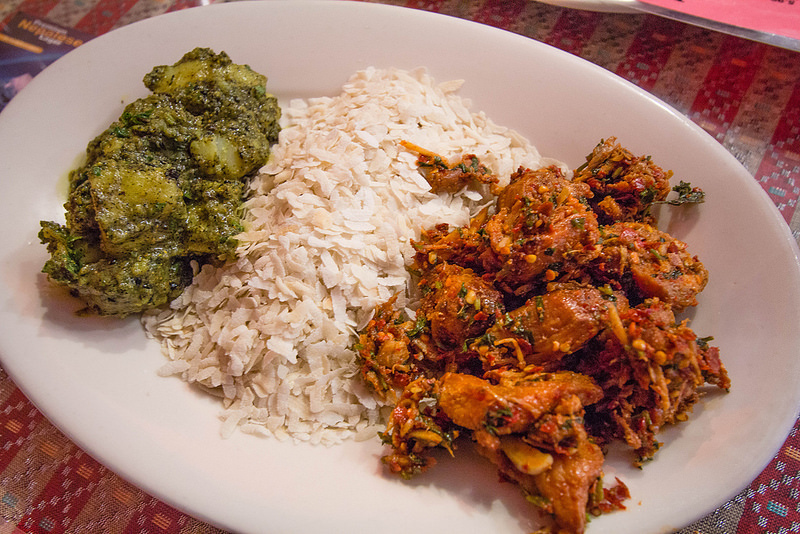 I had Nepali for dinner with a couple friends and the sister! Chicken chwela was highly recommended by a Nepali friend, so I ordered for the table.

The waitress said the three components can be eaten together, or individually. The chicken is VERY spicy; you’ve been warned. The potato salad was sweet and refreshing after eating the chicken. I’d never had beaten rice before so that was interesting; it’s hard to describe it.

Flattened rice (also called beaten rice) is a dehusked rice which is flattened into flat light dry flakes. These flakes of rice swell when added to liquid, whether hot or cold, as they absorb water, milk or any other liquids. The thicknesses of these flakes vary between almost translucently thin (the more expensive varieties) to nearly four times thicker than a normal rice grain. This easily digestible form of raw rice is very popular across Nepal, India, and Bangladesh, and is normally used to prepare snacks or light and easy fast food in a variety of Indian cuisine styles, some even for long-term consumption of a week or more. (Wikipedia)

Potato achaar is a popular, addictively delicious, refreshing potato salad dish from Nepal.  Only rarely have I come across a traditional Nepali meal that is served without potato achaar.  It is a very flexible and popular potato dish often served as a side dish with Nepali staple Daal-Bhaat-Tarkaari. It can be served at any time of the day as a snack food with cheura or chewra (pressed rice flakes), sel-roti (fried rice bread) and poori (deep-fried puffed bread),  for family gatherings, picnics and other casual functions or festive gatherings.   For a  Nepali bhoj,  ceremonial and formal occasions feast,  aloo ko achaar is a must item.  A large quantity of potato salads are prepared that accompanies other ceremonial food items. (Taste of Nepal)