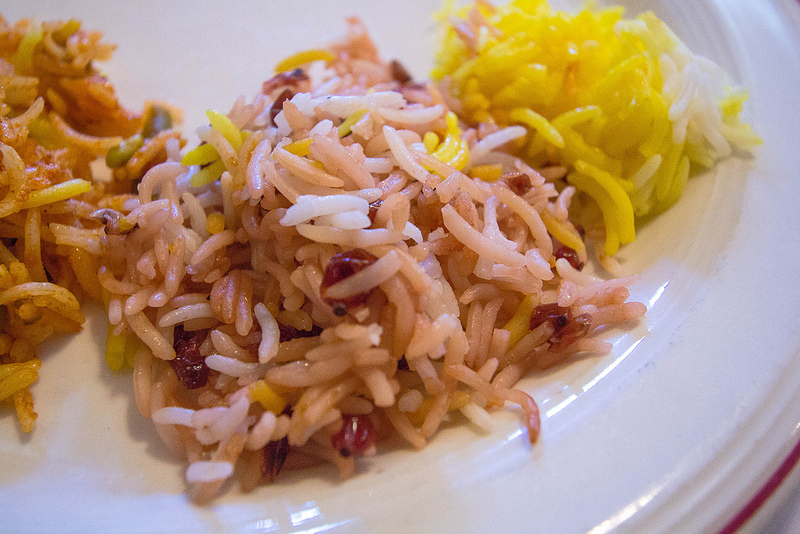 One awesome thing about having diversity in the workplace is the opportunity to try foods from a coworker’s ethnicity! One of my coworkers, Beeta, is Iranian American. She also has a YouTube channel, by the name of Stationary Bee, where she does reviews of various stationaries; check it out! Today, we got to try foods from Beeta’s roots!

Zereshk polo – basmati rice mixed with barbarries and saffron, served with chicken. Zereshk translates to barberries, while polo translates into rice. The barberry has a similar taste to cranberry, but it’s sweet yet tarty, and much softer. The chicken served with the zereshk polo is shown below. 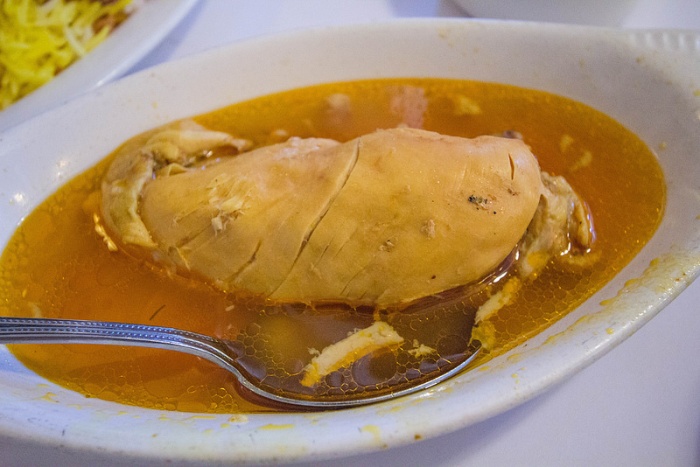 Known as “celebration rice” or “jewelled rice”, this is often cooked for weddings. It is made with wild, red barberries (zereshk), which give the dish its jewel-like appearance and an exotic, slightly tart taste. It is usually served with chicken, as it is in this recipe – the chicken, while delicious, is considered the accompaniment and the rice is the centerpiece. (SBS)

Polo is steamed Persian rice – fluffy and fragrant – made with the best quality rice one can find, following a multi-step process that includes:  washing, soaking, boiling, draining, followed by steam-cooking — each step with its own traditional rules of engagement.  (By the way, polo is pronounced thus: “po” as if you’re saying Edgar Allen Poe + “lo” as if you’re singing: “Her Name Was Lola.” ♫ At the Copa, Copacabana … ♫ …Such a catchy tune!) Polo is either mixed (polo makhloot) or plain white rice (polo sefid). (Fig & Quince)

Another note I want to add is — Until I met Beeta, I had been confused between Persia and Iran. If you were confused or wondering as well, here’s a good explaination, from Heritage Institute

The names Iran and Persia are often used interchangeably to mean the same country. Iran is the legal name. Persia, was an ancient kingdom within Iran. Iran came to be known as Persia in the West thanks to classical Greek authors during whose time Persia was the dominant kingdom in Iran. To call all of Iran ‘Persia’, would be like calling all of Britain ‘England’.

Iran is a relatively modern contraction of the name Airyana Vaeja (the ancient homeland of the Airya or Aryans). Over time, Airyana Vaeja became Airan-Vej, then Eran-Vej or Airan-Vej (the Parthians and Sassanians had a slightly different pronunciation), then Eran or Airan, and finally Iran.