A friend went to Taiwan over the holidays, and got some Taiwanese pineapple cakes! These particular pineapple cakes were from China Pacific Catering Services Ltd. My friend got these on her flight back home via China Airlines. 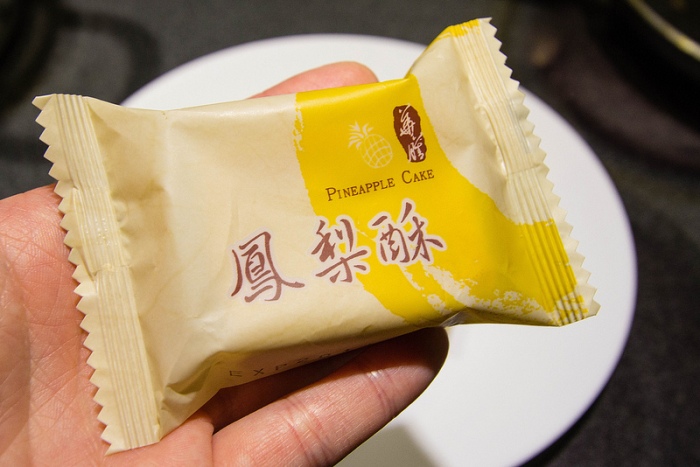 Pineapple cakes have a shortbread-like exterior which crumbles upon touch. The inside is filled with a pineapple jam-like filling. (Kirbie’s Cravings)

Below is a background of the Taiwanese pineapple cakes, from Taiwan Food Culture:

Pineapple cakes’ success is connected to their special characteristics. First of all, they keep well and are easy to carry. Not especially sweet or moist, they can remain fresh for 15 days without preservatives. “And they’re not crumbly either, so you don’t have to worry that they’ll fall apart if you bump into something,” notes Chang Kuo-rong, chairman of the Taipei Bakery Association. Next, since pineapple cakes are mostly bought as gifts for friends and family, flavor and price are top considerations. Buttery pineapple cakes are sweet without being oily. And they’re not particularly expensive, with 12-pack boxes running from NT$300–600. Furthermore, the pineapples used to fill these cakes are mostly grown in southern and central Taiwan. The supply is stable, and the crop isn’t sensitive to the weather. Tasty, sweet and keeping well, they are well suited to serve as a representative product of Taiwan.

Early on, pineapples were one of Taiwan’s most important cash crops. During the Japanese era, various new varieties from overseas were introduced, laying the groundwork for the pineapple-processing industry. In 1971, some 4.01 million boxes of canned pineapples were exported. They made an outstanding contribution to earning foreign exchange and fostering prosperity in Taiwan’s farming villages. Later, due to rising costs of production as well as low-cost competition from Southeast Asia, pineapple exports were hit hard. In the 1980s there was a shift from “focusing on processing for exports with domestic sales as secondary” to “focusing on domestic sales of fresh fruit, with exports as secondary.” In recent years, thanks to promotions by government agricultural agencies, many new varieties have been introduced for fresh consumption, causing market demand to grow.

Pineapple cakes have at least a century of history in Taiwan. Early on, made from pineapple paste surrounded by a cake crust, the cakes were truly cake-shaped. But pineapple’s sourness and stringy fiber (which easily gets caught in the teeth) gave them a rather coarse mouthfeel. Consequently, the makers began to try out other ingredients. They stumbled on winter melon, which has a water content of 90%. The fiber of winter melon is finer. Makers first cook it and remove the water, before adding pineapple, sugar, malt and other ingredients. It turned out that simmering the mix of winter melon and pineapple for a long time created the filling that tasted best. It wasn’t stringy, wouldn’t stick to the teeth, and offered a glistening yellow color, with the fragrance and flavor of pineapple. Overall, it was a big improvement. According to the principles of traditional Chinese herbal medicine, winter melon has a “cool” nature. It helps to dispel heat and is good for the metabolism. Meanwhile, thirst-quenching pineapples promote production of saliva and help with digestion. They’re a perfect match. Nevertheless, with the passage of time, the filling used for pineapple cakes ended up becoming overwhelmingly winter melon with very little pineapple. Recently, with a growing reverence for authenticity, makers introduced pineapple cakes with a filling that consists almost entirely of pineapple with no winter melon at all. That in turn kicked off a craze for using different varieties of pineapple in the filling.

Leave a Reply to The Squishy Monster Cancel reply