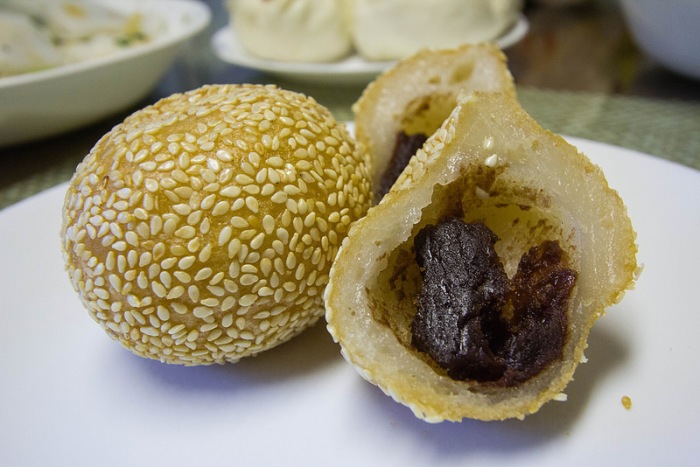 Glutinous rice balls with red bean paste filling and sesame seeds on the outside.

The following is some info about these sesame balls, from Wikipedia:

Jian dui (Mandarin) or jin deui (Cantonese), is a type of fried Chinese pastry made from glutinous rice flour. The pastry is coated with sesame seeds on the outside and is crisp and chewy. Inside the pastry is a large hollow, caused by the expansion of the dough. The hollow of the pastry is filled with a filling usually consisting of lotus paste (蓮蓉), or alternatively sweet black bean paste (hei dousha, 黑豆沙), or less commonly red bean paste (hong dousha, 紅豆沙).

Depending on the region and cultural area, jian dui are known as matuan (麻糰) in northern China, ma yuan (麻圆) in northeast China, and zhen dai (珍袋) in Hainan. In American Chinese restaurants and pastry shops, they are known as Sesame Seed Balls. They are also sometimes referred to as zhimaqiu (芝麻球), which translates to sesame balls in English.

The origins of jian dui can be traced back to the Tang dynasty as a palace food in Chang’an, known as lüdui (碌堆). This food item was also recalled in a poem by the Tang poet Wang Fanzhi. With the southward migration of many peoples from central China, the jian dui was brought along and hence became part of southern Chinese cuisine. In Hong Kong, it is one of the most standard pastries. It can also be found in most Chinatown bakery shops overseas.

These sweet, deep-fried puffs of dough coated in sesame seeds are a mainstay of dim sum houses, but at New Year’s they take on special meaning. Their round shape and golden color are considered lucky, and the fact that the dough balls swell as they’re fried and increase several times in size is a happy metaphor for a small venture growing and bringing back a large return. Sesame seed balls are traditionally filled with a bit of sweet red bean paste – they’re pretty much the Chinese equivalent of a jelly doughnut, only lighter and fluffier. (Dessert First)