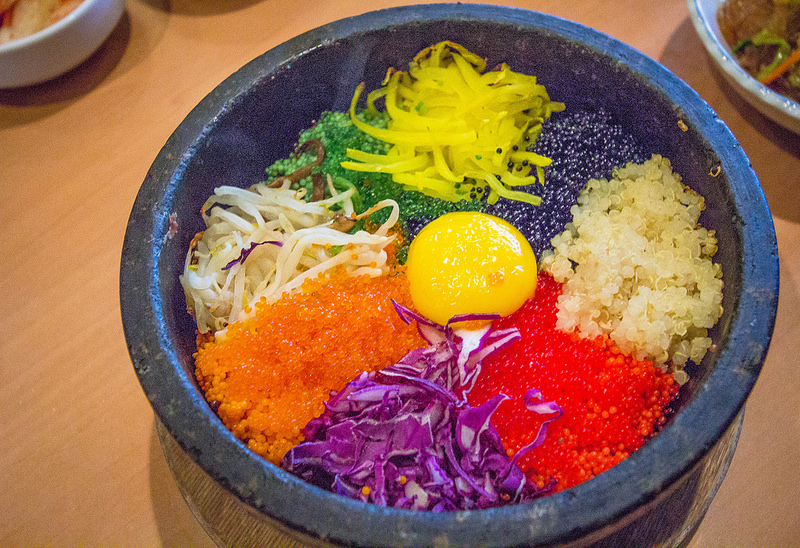 I had Korean food for late lunch with my dad and a friend, and picked this dish! 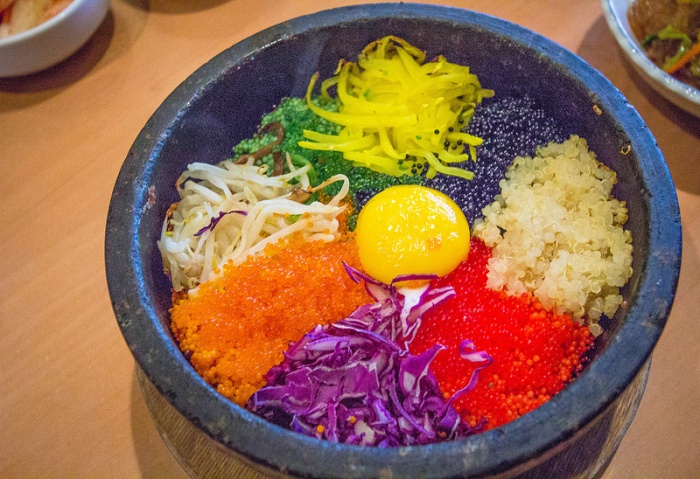 Fish roe rice bowl (알밥) – fish roe, vegetables, egg yolk over rice in hot stone bowl. There were four different colors of fish roe, in orange, red, green, and black color. As for the vegetables, there was red cabbage, soy bean sprouts, and pickled yellow radish/daikon (단무지, danmuji). Quinoa was also at the top, between the black and red fish roe. Underneath all those ingredients was mixed rice; you can choose either mixed or white rice. I also added red pepper paste and sesame oil to my bowl before mixing and eating.

The fish roe looked similar to tobiko (Japanese flying fish roe). When I mixed up all the ingredients in the stone bowl, it looked like I was eating sprinkes. It also smelled fishy, so don’t order albap if you cannot stand fishy smells. The stone bowl was still really hot when we finished eating and packed up the leftovers!

The name of Bibimbap is first mentioned in the Siuijeonseo, an anonymous Cookbook dating from the end of the 19th century. The variation of bibimbap called ‘dolsot bibimbap’ is served in a very hot stone bowl at the bottom of which is placed the rice with vegetables and meat atop. It is often covered with a raw or sunny-side up egg. The bowl is traditionally placed on a wooden base and served at the table this way. (196 Flavors)

According to one of my sister’s roommates, albap is usually found in coastal towns (in South Korea) and the variants based on the kinds of fish that are most common in the area.