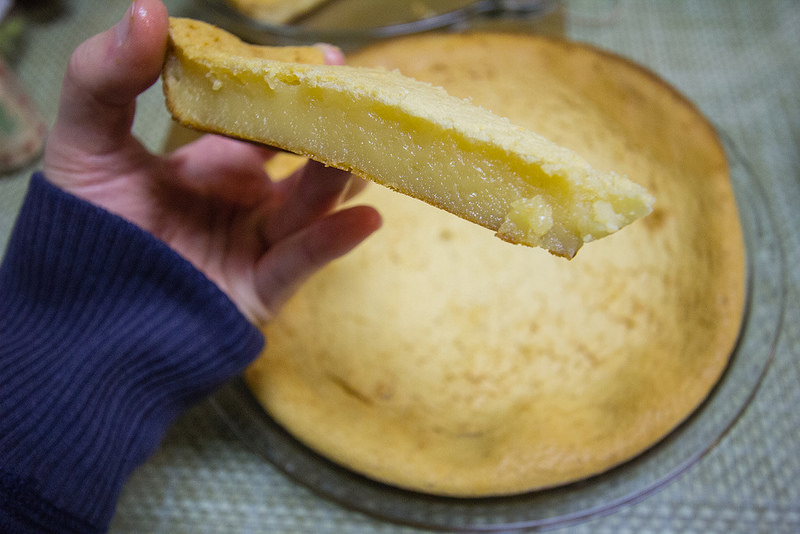 My sister is home from SLO for the weekend, and she made some baked nian gao! She was surprised to find out that my family didn’t have a proper nian gao for Chinese New Year, so she made two 12″ nian gao today! It’s my favorite variation of the Chinese New Year cake! In fact, I already ate a quarter of one…

You have probably noticed I didn’t have many Lunar New Year food-related posts. I don’t normally cook or bake … and my mom was sick with pneumonia (in both lungs!) during Lunar New Year, so we didn’t really celebrate it this year. However, we had lots of taro cake from friends and I just found a banh tet in the fridge last night! 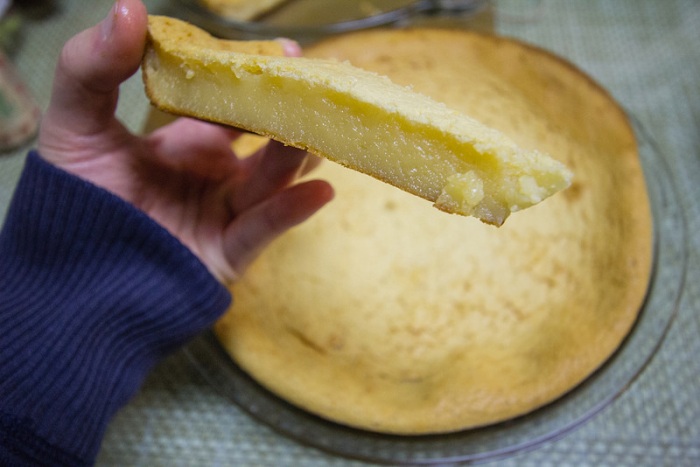 Niangao (nin gou in Cantonese), sometimes translated as year cake or Chinese New Year’s cake, is a food prepared from glutinous rice and consumed in Chinese cuisine. It is available in Asian supermarkets and from health food stores. While it can be eaten all year round, traditionally it is most popular during Chinese New Year. It is considered good luck to eat nian gao during this time, because “nian gao” is a homonym for “higher year.” The Chinese word 粘 (nián), meaning “sticky”, is identical in sound to 年, meaning “year”, and the word 糕 (gāo), meaning “cake” is identical in sound to 高, meaning “high or tall”. As such, eating nian gao has the symbolism of raising oneself taller in each coming year (年年高升 niánnián gāoshēng). It is also known as a rice cake. This sticky sweet snack was believed to be an offering to the Kitchen God, with the aim that his mouth will be stuck with the sticky cake, so that he can’t badmouth the human family in front of the Jade Emperor. (Wikipedia)

Nian Gao (年糕) or Chinese New Year’s Cake is an auspicious food item made during the Chinese (Lunar) New Year period. It has been around for more than 3000 years. There are many regional variations, even Korean and Japanese have their own versions but essentially this is made with glutinous rice and sugar. It’s believed that eating Nian Gao can bring us good luck because ‘Nian Gao’ is a homonym for “higher year”, thus symbolises promotions, prosperity or simply for kids: growing taller. (Kelly Siew Cooks)

“Nian gao” or “leen go” (translation: year cake) is a cake that is traditionally eaten at Chinese New Year. It has a soft, dense, sticky and chewy texture and is not meant to be very sweet. Traditionally, it is vegan and steamed. The baked version combines a Western cake-like crust with the traditional sticky and chewy middle. Traditional nian gao / leen go is usually made in 9″ or 10″ pie plates. Baked nian gao tastes best when served hot. (Cooking with Alison)