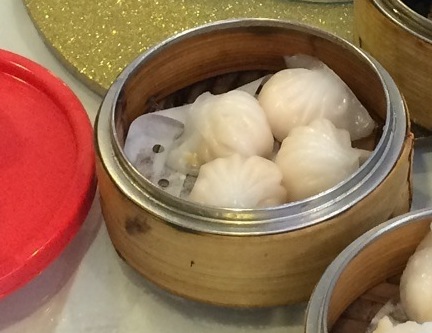 This was one of the dishes I had during dim sum with coworkers.

Ha gow (anglicized as har gow) or xiā jiǎo is a traditional Chinese dumpling served in dim sum. The dumpling is sometimes called a shrimp bonnet for its pleated shape. This dish is often served together with sieu mai; when served in such a manner the two items are collectively referred to as hagow–sieu mai (蝦餃燒賣). These shrimp dumplings are transparent and smooth. This dish is said to be the one that the skill of a dim sum chef is judged on. Traditionally, ha gow should have at least seven and preferably ten or more pleats imprinted on its wrapper. The skin must be thin and translucent, yet be sturdy enough not to break when picked up with chopsticks. It must not stick to the paper, container or the other ha gow in the basket. The shrimp must be cooked well, but not overcooked. The amount of meat should be generous, yet not so much that it cannot be eaten in one bite. (Wikipedia)

There are usually two types of filling you would find in har gow. Number one: A lump of shrimp meat usually with mince size pieces of bamboo. Number two: Minced shrimp combined with either bamboo or water chestnut. (Rasa Malaysia)

The following is a background of har gow, from Food For Thought: Dumpling Migration:

Teahouses sprung up to accommodate travelers who were tired after journeying along the Silk Road. Rural farmers might also go to the teahouses after a long day of working in the field to enjoy an afternoon of tea, dim sum, and relaxing conversation. Today, har gow can be found in most restaurants and teahouses in Guangdong, China. Local people order these shrimp dumplings when they drink their tea at leisure time.

Dim sum became popular during the Tang Dynasty. Its origins are Cantonese, and dianxin was the northern way to say it. In the Guangdong Provence and in Guangzhou, they call “dim sum” “yum cha”. Dim sum was popular in the south, where many people went to and still go to restaurants early in the day to enjoy these labor-intensive small bites. This was usually the first eating time of the day. There were many recipes for dim sum in the Tang Dynasty. According to the General Annuls of Shandong, Prime Minister Duan Wenchang compiled 50 volumes of dianxin recipes just from those eaten in his Shandong Province.

It took centuries for the art of dim sum to develop. In the Western United States, dim sum came about as a natural result of nineteenth century Chinese immigrants settling in the East and West coasts. Some people believe that dim sum is actually the inspiration for the concept of “brunch” that we have in America today, a way to combine breakfast and lunch into a large midmorning meal. Nowadays there are vegetarian, low fat, and even health conscious alternatives for dim sum dishes.

Posted on February 5, 2014 by Mango in China, Guangdong