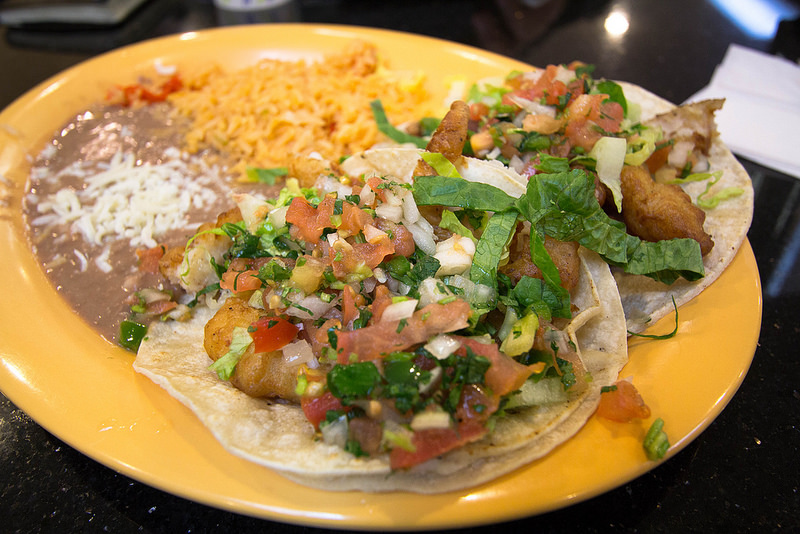 Had dinner with two college buddies I hadn’t seen for a while! I ordered two fish tacos, with a side of rice and refried beans w/ cheese.

The fish tacos were deep fried fish with pico de gallo (salsa consisting of diced tomatoes, onions, cilantro) and lettuce, on top of two flour tortillas. They are best eaten right away; if you order these to-go, they tend to get soggy by the time you eat it.

The following is a background of fish tacos, from Sunset:

From this perspective, there is little question that people have been eating fish tacos in the coastal areas of Mexico for an awfully long time. It probably goes back thousands of years to when indigenous North American peoples first wrapped the plentiful offshore catch into stone-ground-corn tortillas.

More recently, somewhere in Baja California, sometime in the last 40 or 50 years, someone concocted what is generally considered to be the prototypical fish taco. According to aficionados ― call them the codnoscenti ― this humble delicacy consists of a lightly battered mild white fish that is deep-fried, then served in a corn tortilla (often two) with shredded cabbage, a thin sour-cream- or mayonnaise-based sauce, a bit of salsa, and a most vital spritzito of lime.

On this everyone agrees. What everyone doesn’t agree on is where in Baja the archetype originated. San Diego fish-taco mogul Ralph Rubio, whose chain of stores makes him the great white shark of the fish-taco world, cites San Felipe as the source. But the señoras hustling and hawking virtually identical fish tacos at virtually identical stands at Ensenada’s fish market won’t stand for that. They say their port town is the fish taco’s true home, dating at least from the opening of the Ensenada mercado, in 1958.

Posted on February 5, 2014 by Mango in Baja California, Mexico