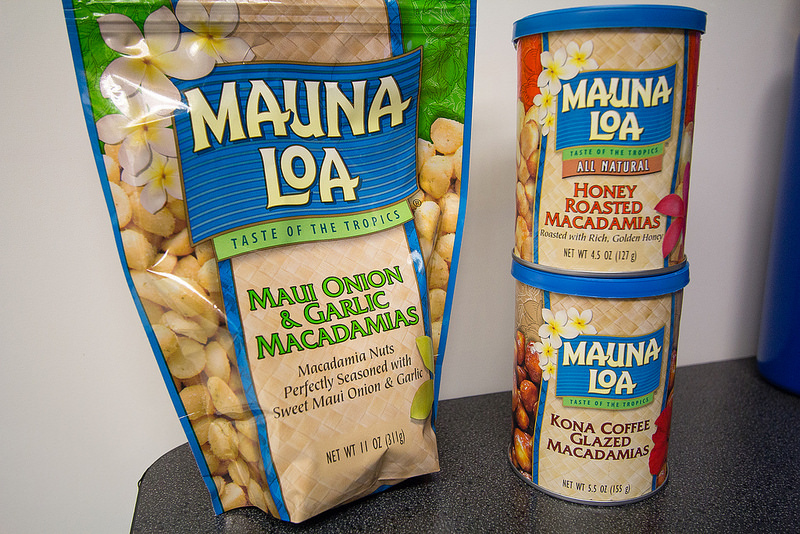 Macadamia is a genus of four species of trees indigenous to Australia and constituting part of the plant family Proteaceae. They grow naturally in north eastern New South Wales and central and south eastern Queensland, Australia. Common names include macadamia, macadamia nut, Queensland nut, bush nut, maroochi nut, queen of nuts and bauple nut; and from Indigenous Australians’ languages bauple, gyndl, jindilli, and boombera. The first commercial orchard of macadamia trees was planted in the early 1880s by Rous Mill, 12 kilometres (7.5 mi) southeast of Lismore, New South Wales, consisting of M. tetraphylla. Besides the development of a small boutique industry in Australia during the late 19th and early 20th centuries, macadamia was extensively planted as a commercial crop in Hawaii from the 1920s. Macadamia seeds were first imported into Hawaii in 1882 by William H. Purvis. The young manager of the Pacific Sugar Mill at Kukuihaele on the Big Island, planted seeds that year at Kapulena. (Wikipedia)

By 1921, a far-seeing Massachusetts man, Ernest van Tassel, thought there might be commercial potential in growing macadamias. He planted the first Hawaiian macadamia plantation on government land near Honolulu. Unfortunately, he was ahead of his time. Back then, seedlings from one parent tree couldn’t produce nuts of consistent quality. By the 1930’s a small amount of nuts were sold commercially, but large-scale commercial production was yet to come. In 1922, The University of Hawaii embarked on 20 years of testing and research. Some 60,000 trees were observed and tested in a painstaking process of selection and grafting. Eventually nine strains were developed that could consistently produce a high quality nut. That was the beginning of a long partnership between Mauna Loa and the University of Hawaii, which continues today. The original plantation of what was to become Mauna Loa Macadamia Nut Corporation was established in 1946. The very first macadamia nut trees were planted early that year near Kea’au on the Big Island of Hawaii, where Mauna Loa Macadamia Nut Corporation still resides today. (Mauna Loa Macadamia Nut Corporation)