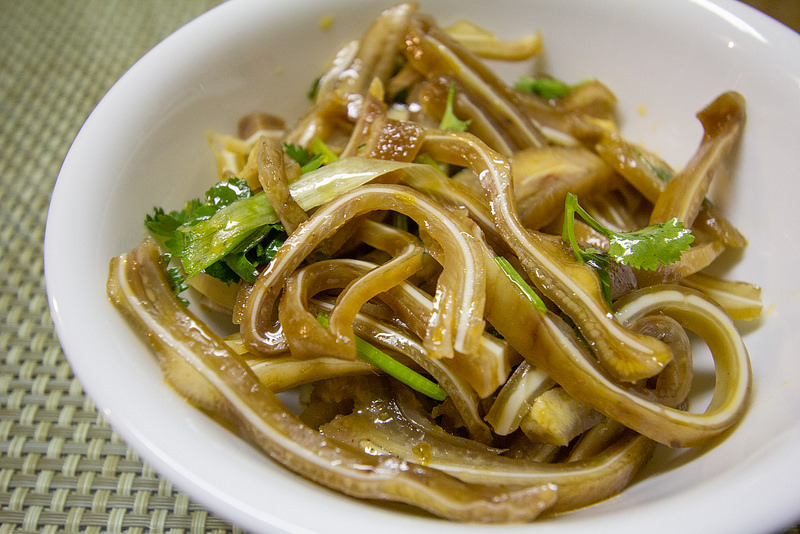 I went with my mom to Marina Food’s deli to get some BBQ pork, and we saw one of our favorite appetizers, the pig’s ear! We were excited to see it and just had to get some for dinner. :D

In Chinese cuisine, pig’s ear is often an appetizer or a side dish, called 豬耳朵 (pinyin: zhū ěr duo, “pig’s ear”). Pig’s ear can be abbreviated in Chinese to simply 豬耳. In some regions, pig’s ears are known as 层层脆 (ceng ceng cui, literally “layers of crunch”). It can be first boiled or stewed, and then sliced thin, served with soy sauce or spiced with chili paste. When cooked, the outer texture is gelatinous, akin to tofu, and the center cartilage is crunchy. Pig’s ear can be eaten warm or cold. (Wikipedia)

Classic Sichuan preparation: Pig ears are boiled with aromatic spices until tender, then stacked up and pressed down just like a classic French terrine. Once set, the terrine is thinly sliced, marinated in vinegar and spices and served cold. The cross section of the ears sort of looks like a cross between a relief map and strips of bacon. It’s the high gelatin content of the ears — easy to miss when fried — that makes the dish work. Cut paper thin on a meat slicer the ears become soft and supple, almost like mortadella. Slice it by hand slightly thicker and you’ll get a better sense of the crunchy cartilage and firm gelatin. (Los Angeles Times)