Drove back to the SF Bay Area today, to attend a baby shower. Aaaaand lumpia from Goldilocks was one of the yummy appetizers served!!

Goldilocks is a bakeshop chain based in the Philippines, that makes Filipino cakes, breads, and pastries. They also have a foodshop that makes Filipino dishes (including beef, chicken, pork, seafood, and vegetable dishes), appetizers, and desserts. In the United States, there are several locations in the SF Bay Area and Southern California, plus one in Las Vegas. 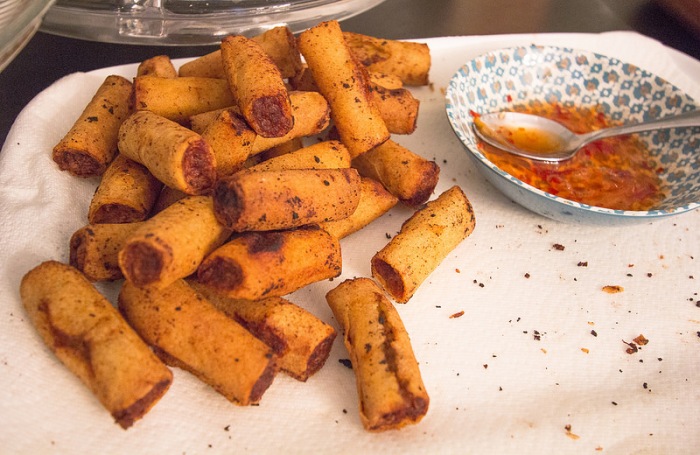 Goldilocks’ lumpia can be ordered in two ways, with the filling wrapped in an egg roll or crepe wrapper, to make the lumpia done in the deep fried crispy variety or soft crepe variety, respectively. The ones shown in the photos above were the deep fried ones, which are like mini egg rolls, and they were accompanied by sweet chili sauce.

The following is a bit of history about lumpia, from Wikipedia:

Lumpia are pastries of Chinese origin similar to fresh popiah or fried spring rolls popular in Southeast Asia. The term lumpia derives from Hokkien lunpia (Chinese: 潤餅; Pinyin: rùnbǐng; Pe̍h-ōe-jī: jūn-piá, lūn-piá), which is an alternate term for popiah. The recipe, both fried and fresh versions, was brought by the Chinese immigrants from the Fujian province of China to Southeast Asia and became popular where they settled in Indonesia and the Philippines.

Lumpiáng Shanghai is believed to be originated from Shanghai, these meat-laden, fried type of lumpia are filled with ground pork or beef, minced onion, carrots, and spices with the mixture held together by beaten egg. They may sometimes contain green peas, cilantro (Chinese parsley or coriander) or raisins. Lumpiyáng shanghai is commonly served with sweet and sour sauce owing to the influence of Chinese cuisine, but catsup (tomato or banana) and vinegar are popular alternatives. This variety is by standard 2.5 cm in diameter and around 10-15 cm in length. However, most restaurants and street vendors often serve lumpiáng shanghai in smaller diameters, typically 12 to 20 cm, and serve these with a spicy sauce instead of a sweet and sour sauce.

Posted on January 19, 2014 by Mango in Philippines

One thought on “Philippines: Lumpia”