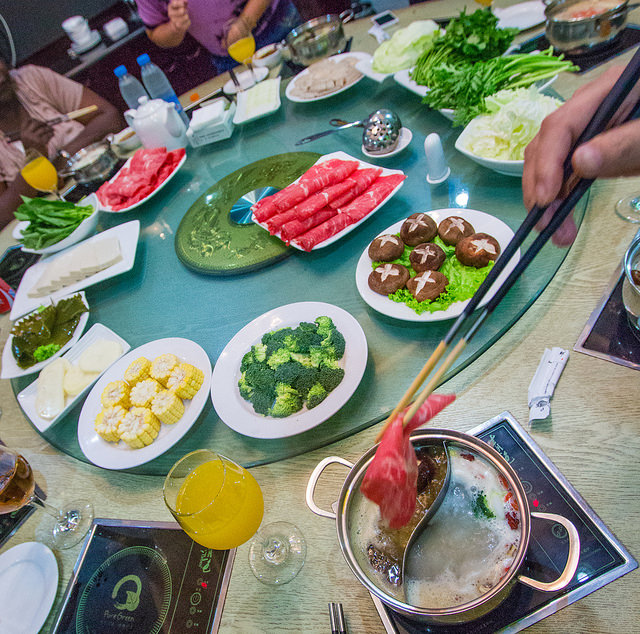 Xi’an is a city in Shaanxi province and located in Western China, which is close to Sichuan province and Chongqing (one of 5 municipalities). Sichuan hot pot is literally full of red peppers, and its broth can easily cause tongue numbness. So, what does Chongqing-style hot pot look like? How different/similar is it to the Sichuan or Cantonese versions?

Today, we went to a restaurant that specializes in Chongqing hot pot, after visiting Shaanxi Bible School. The restaurant gives you the option of having individual hot pot, or one large hot pot for the group. For the individual hot pot setting, each diner has its own stovetop. In the group setting, there is one stove in the middle of the table, for one communal hot pot. 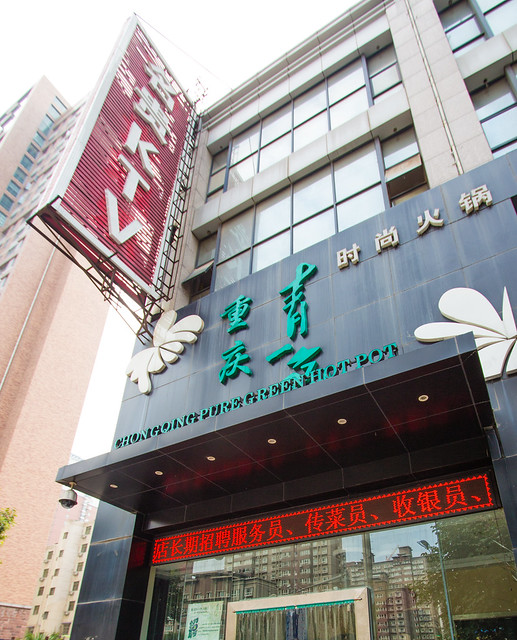 We had party of 7 and sat in a private room in the back of the restaurant, where we had individual hot pot. We also had the choice of different soup bases; you can go for just one soup base, or half and half. I got half spicy, half non-spicy. I like dipping my meats into the spicy broth, and the vegetables to non-spicy broth! After ordering the soup, meats, and vegetables, we all went to the middle of the restaurant where you can make your own dipping sauce from 18 ingredients!! 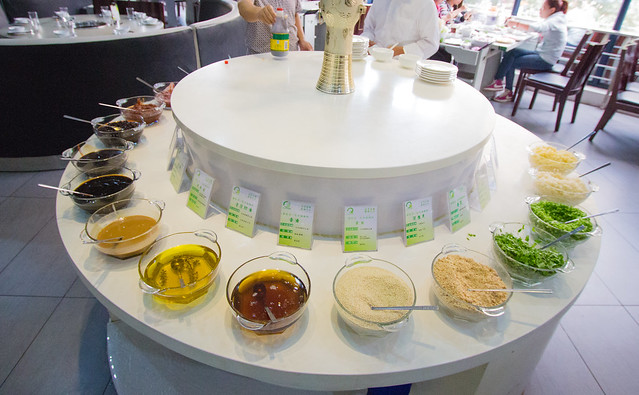 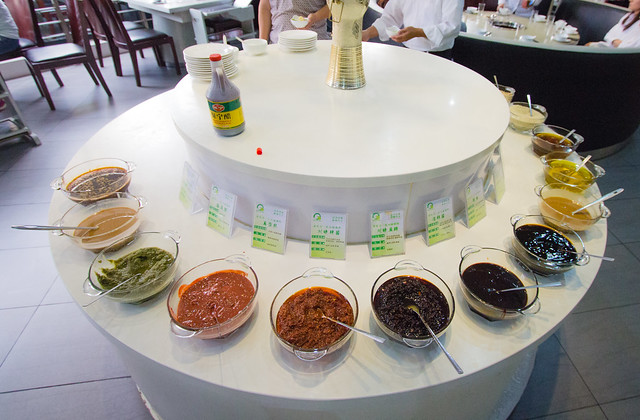 When I got back to my seat, my hot pot was on top of the stove, ready to be boiled! I had two soup bases; a Chinese herbal soup (white broth) and spicy peppercorn soup (green-yellowish broth). All we had to do now was to let the soup come to a boil, and wait for the food to arrive! 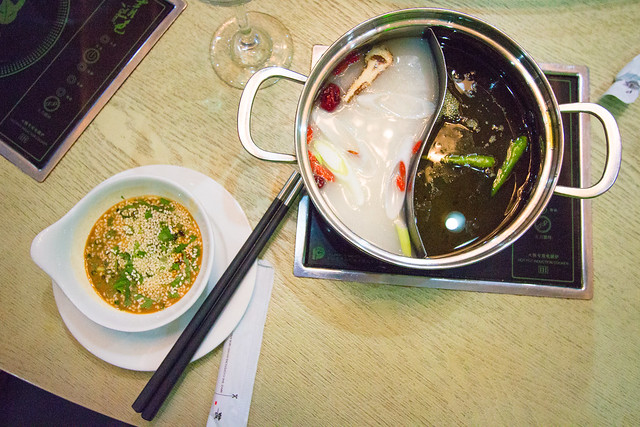 The chopsticks here came into two parts. The handle (longer part) was placed on the table with the bowl and plate. The ends (shorter part) were paper wrapped; you rip it off and attach it to the handles. These chopsticks are also longer than ‘ordinary’ chopsticks, to prevent burning yourself from the bubbling soup. 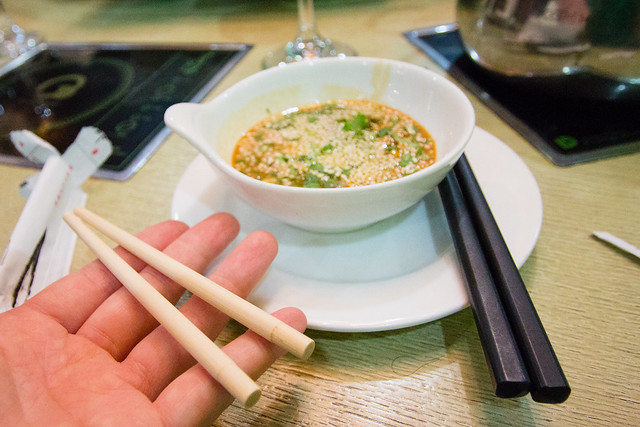 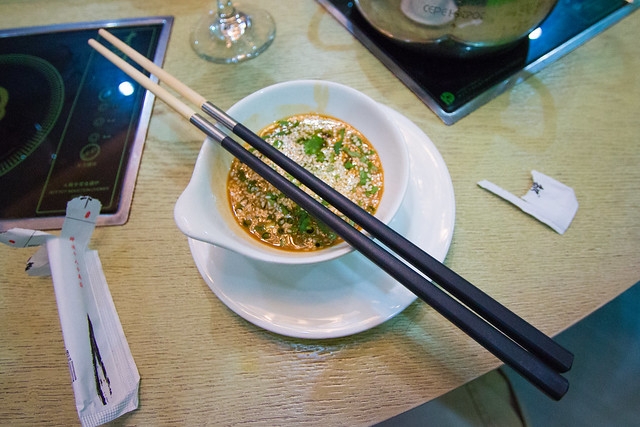 My soups are boiling now…..but where’s the food?! 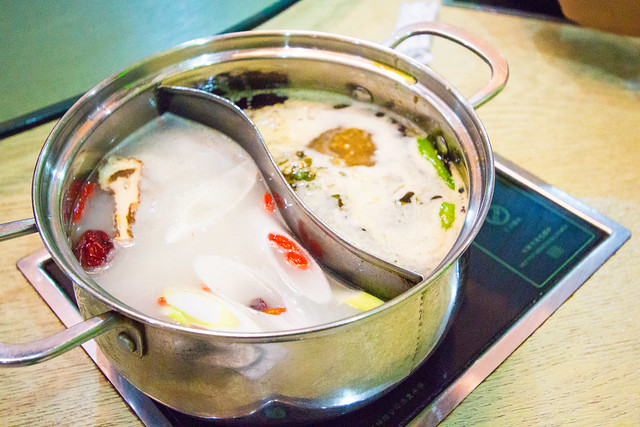 The meat, tofu, seaweed, and vegetables are finally here!! Let the dipping and eating commence! 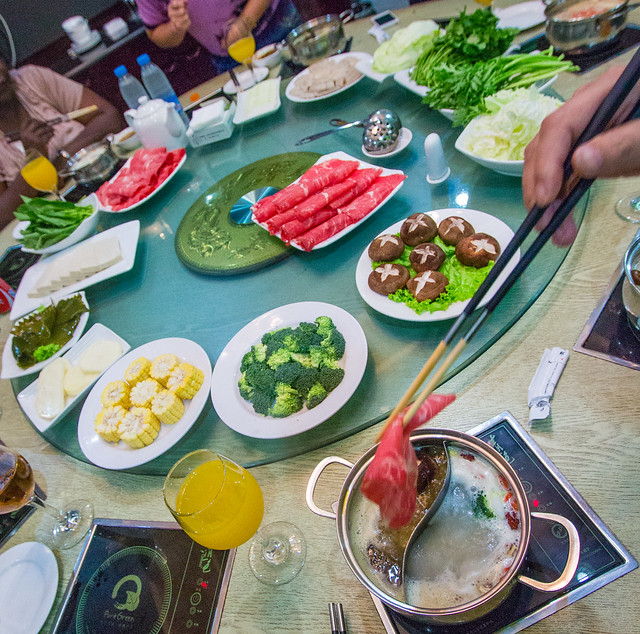 Here’s a bit of info about Chongqing hot pot, from Wikipedia:

One of the most famous variations is the Chongqing (Chungking) má là (Chinese: 麻辣 – “numb and spicy”) hot pot, to which Sichuan pepper (Chinese: 花椒 huā jiāo “flower pepper”; also known as prickly ash) is added. Combined with spicy ingredients like chili, it creates a sensation on the tongue that is both spicy and burns and numbs slightly, almost like carbonated beverages. It is usual to use a variety of different meats as well as sliced mutton fillet. A Chongqing hotpot is markedly different from the types eaten in other parts of China. Quite often the differences lie in the meats used, the type of soup base, and the sauces and condiments used to flavor the meat. “má là huǒ guō” could be used to distinguish from simply “huǒ guō” in cases when people refer to the “Northern Style Hot Pot” in China. “Shuàn yáng ròu”, Chinese: 涮羊肉 (instant-boiled lamb) could be viewed as representative of this kind of food, which does not focus on the soup base.